We present ultraviolet (UV) imaging polarimetry data of the Seyfert 2 galaxy Mrk 3, taken by the Hubble Space Telescope. The polarized flux is found to be extended to ~1 kpc from the nucleus, and the position angles of polarization are centrosymmetric, confirming that the polarization is caused by scattering. We determine the location of the hidden nucleus as the center of this centrosymmetric pattern. From the polarization images taken in two broad bands, we have obtained the color distribution of the polarized flux. Some regions have blue polarized flux, consistent with optically thin dust scattering, but some bright knots have a color similar to that of a Seyfert 1 nucleus. Also, the recent Chandra X-ray observation suggests that the ratio of scattered UV flux to scattered X-ray flux is rather similar to the intrinsic UV/X-ray ratio in a Seyfert 1 nucleus, if the observed extended X-ray continuum is scattered light. While the scattered X-rays would essentially be from electron scattering, the similarity of both the UV slope and UV/X-ray ratio to those of a Seyfert 1 nucleus would lead to two possibilities as to the nature of the UV scatterers. One is that the UV may also be scattered by electrons, in which case the scattering gas is somehow dust free. The other is that the UV is scattered by dust grains, but the wavelength-independent UV scattering with low efficiency, indicated by the UV slope and UV/X-ray ratio, would suggest that the grains reside in UV-opaque clouds, or that the dust might be mainly composed of large grains and lack small-grain population. Based on observations with the NASA/ESA Hubble Space Telescope, obtained at the Space Telescope Science Institute, which is operated by the Association of Universities for Research in Astronomy, Inc. under NASA contract NAS5-26555. 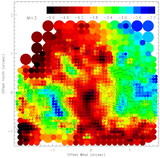