We have detected extremely wide (1100 km s-1) CO(1-0) emission from NGC 1144, an interacting, luminous infrared galaxy that is the dominant component of the Arp 118 system. The observations show that NGC 1144 is one of the most CO-luminous galaxies in the local universe, with a CO luminosity twice that of Arp 220. Maps with the IRAM interferometer show that the CO is not in or very near the Seyfert 2 nucleus, but in the 20 kpc diameter ring that extends halfway between NGC 1144 and the elliptical galaxy NGC 1143. The greatest gas concentration, with 40% of the CO luminosity, is in the southern part of the ring, in NGC 1144. Another 15% of the CO luminosity comes from the dominant 10 μm source, a giant extranuclear H II region. The ring of molecular gas, the off-center nucleus, the ring extending halfway to the intruder, and the velocity of the intruder nearly equal to the escape velocity all show that Arp 118 is a ring galaxy produced by a collision of a massive spiral with an elliptical. The most spectacular property is the velocity range, which in Arp 118 is 2-3 times higher than in a typical ring galaxy. Arp 118 is a rare example of a very luminous, extended starburst with a scale of about 5-10 kpc and a luminosity of 3 × 1011 Lsolar. 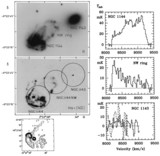