We present analyses of improved photometric and spectroscopic observations for two detached eclipsing binaries at the turnoff of the open cluster NGC 752: the 1.01 days binary DS And and the 15.53 days BD +37 410. For DS And, we find M 1 = 1.692 ± 0.004 ± 0.010M ⊙, R 1 = 2.185 ± 0.004 ± 0.008R ⊙, M 2 = 1.184 ± 0.001 ± 0.003M ⊙, and R 2 = 1.200 ± 0.003 ± 0.005R ⊙. We either confirm or newly identify unusual characteristics of both stars in the binary: the primary star is found to be slightly hotter than the main-sequence turnoff and there is a more substantial discrepancy in its luminosity compared to models (model luminosities are too large by about 40%), while the secondary star is oversized and cooler compared to other main-sequence stars in the same cluster. The evidence points to nonstandard evolution for both stars, but most plausible paths cannot explain the low luminosity of the primary star. BD +37 410 only has one eclipse per cycle, but extensive spectroscopic observations and the Transiting Exoplanet Survey Satellite light curve constrain the stellar masses well: M 1 = 1.717 ± 0.011M ⊙ and M 2 = 1.175 ± 0.005M ⊙. The radius of the main-sequence primary star near 2.9R ⊙ definitively requires large convective core overshooting (>0.2 pressure scale heights) in models for its mass, and multiple lines of evidence point toward an age of 1.61 ± 0.03 ± 0.05 Gyr (statistical and systematic uncertainties). Because NGC 752 is currently undergoing the transition from nondegenerate to degenerate He ignition of its red clump stars, BD +37 410 A directly constrains the star mass where this transition occurs. * Based on observations made with with the Hobby-Eberly Telescope, which is a joint project of the University of Texas at Austin, the Pennsylvania State University, Stanford University, Ludwig-Maximilians-Universität München, and Georg-August-Universität Göttingen. 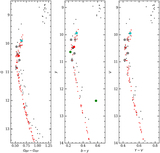