Context. During its all-sky survey, the extended ROentgen Survey with an Imaging Telescope Array (eROSITA) on board the Spectrum-Roentgen-Gamma (SRG) observatory has uncovered a growing number of X-ray transients associated with the nuclei of quiescent galaxies. Benefitting from its large field of view and excellent sensitivity, the eROSITA window into time-domain X-ray astrophysics yields a valuable sample of X-ray selected nuclear transients. Multi-wavelength follow-up enables us to gain new insights into understanding the nature and emission mechanism of these phenomena.
Aims: We present the results of a detailed multi-wavelength analysis of an exceptional repeating X-ray nuclear transient, eRASSt J045650.3−203750 (hereafter J0456−20), uncovered by SRG/eROSITA in a quiescent galaxy at a redshift of z ∼ 0.077. We aim to understand the radiation mechanism at different luminosity states of J0456−20, and provide further evidence that similar accretion processes are at work for black hole accretion systems at different black hole mass scales.
Methods: We describe our temporal analysis, which addressed both the long- and short-term variability of J0456−20. A detailed X-ray spectral analysis was performed to investigate the X-ray emission mechanism.
Results: Our main findings are that (1) J0456−20 cycles through four distinctive phases defined based on its X-ray variability: an X-ray rising phase leading to an X-ray plateau phase that lasts for abouttwo months. This is terminated by a rapid X-ray flux drop phase during which the X-ray flux can drop drastically by more than a factor of 100 within one week, followed by an X-ray faint state for about two months before the X-ray rising phase starts again. (2) The X-ray spectra are generally soft in the rising phase, with a photon index ≳3.0, and they become harder as the X-ray flux increases. There is evidence of a multi-colour disk with a temperature of Tin ∼ 70 eV in the inner region at the beginning of the X-ray rising phase. The high-quality XMM-Newton data suggest that a warm and hot corona might cause the X-ray emission through inverse Comptonisation of soft disk seed photons during the plateau phase and at the bright end of the rising phase. (3) J0456−20 shows only moderate UV variability and no significant optical variability above the host galaxy level. Optical spectra taken at different X-ray phases are constant in time and consistent with a typical quiescent galaxy with no indication of emission lines. (4) Radio emission is (as yet) only detected in the X-ray plateau phase and rapidly declines on a timescale of two weeks.
Conclusions: J0456−20 is likely a repeating nuclear transient with a tentative recurrence time of ∼223 days. It is a new member of this rare class. We discuss several possibilities to explain the observational properties of J0456−20. We currently favour a repeating partial tidal disruption event as the most likely scenario. The long-term X-ray evolution is explained as a transition between a thermal disk-dominated soft state and a steep power-law state. This implies that the corona can be formed within a few months and is destroyed within a few weeks. 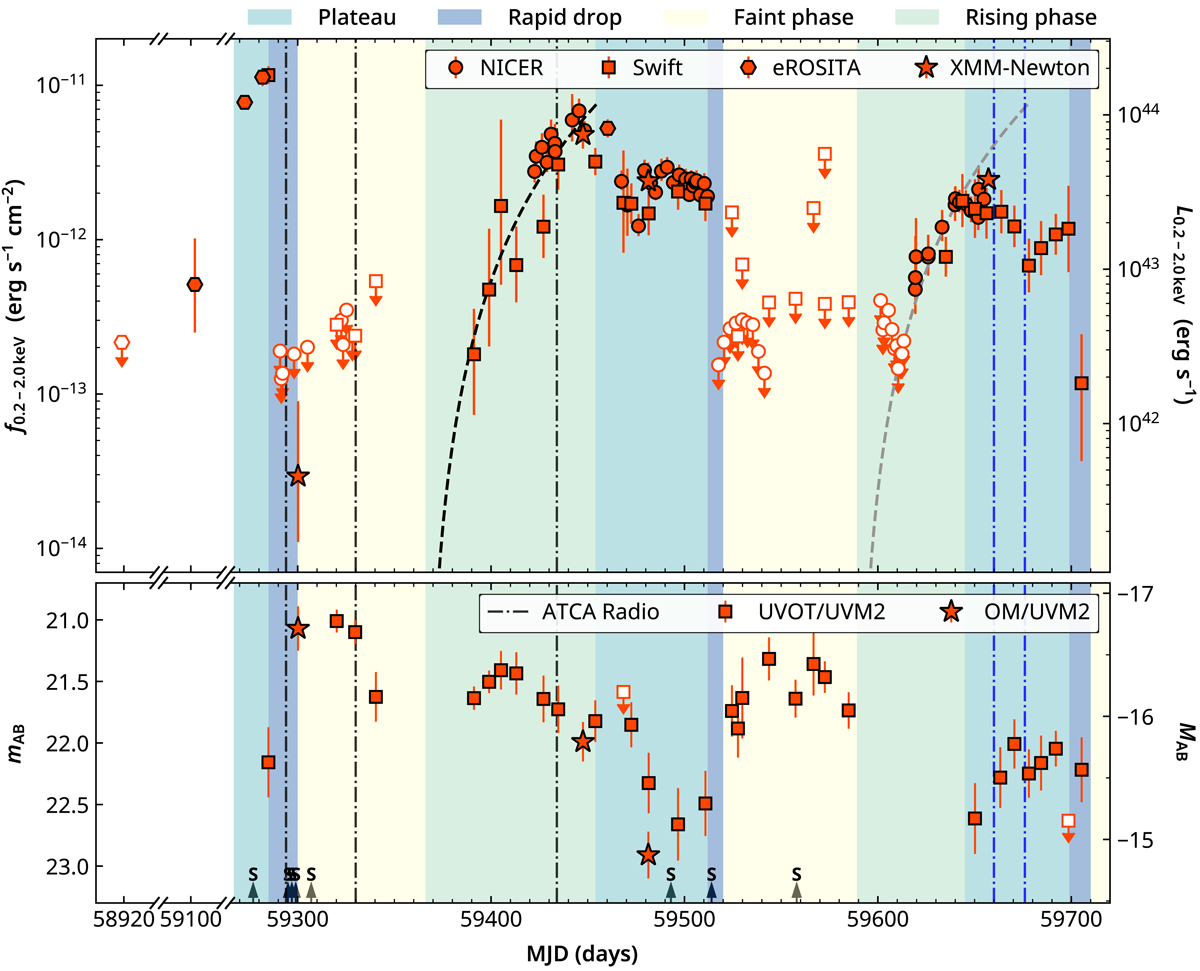