Offset between X-ray and optical centers in clusters of galaxies: connecting eROSITA data and simulations

The characterization of the dynamical state of clusters is key to study their evolution, their selection, and use them as a cosmological probe. The offsets between different definitions of the center have been used to estimate the cluster disturbance. Our goal is to study the distribution of the offset between the X-ray and optical centers in clusters of galaxies. We study the offset for eROSITA clusters. We aim to connect observations to hydrodynamical simulations and N-body models. We assess the astrophysical effects affecting the displacements. We measure the offset for clusters observed in eFEDS and eRASS1. We focus on a subsample of 87 massive eFEDS clusters at low redshift. We link the observations to the offset parameter Xoff measured on dark matter halos in N-body simulations, using the hydrodynamical simulations as a bridge. eFEDS clusters show a smaller offset compared to eRASS1, because the latter contains a larger fraction of massive and disturbed structures. We measure an average offset of 76.3+30.1-27.1 kpc on the subsample of 87 eFEDS clusters. This is in agreement with the predictions from TNG and Magneticum, and the distribution of Xoff from DMO simulations. The tails of the distributions are different. Using the offset to classify relaxed and disturbed clusters, we measure a relaxed fraction of 31% in the eFEDS subsample. Finally, we find a correlation between the offset in hydrodynamical simulations and Xoff measured on their parent DMO run and calibrate a relation between them. There is good agreement between eROSITA data and simulations. Baryons cause a decrement (increment) in the low (high) offset regime compared to the Xoff distribution. The offset-Xoff relation provides an accurate prediction of the true Xoff distribution in Magneticum and TNG. It allows introducing the offsets in cosmology, marginalizing on dynamical selection effects. 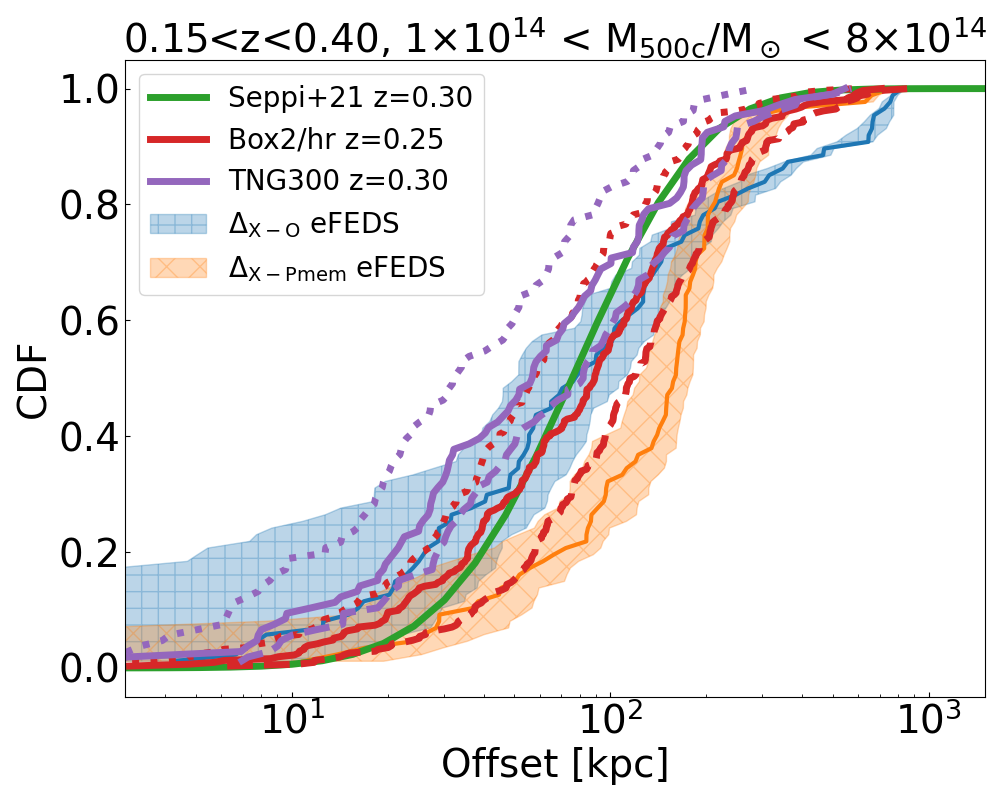