The habitability of planets around M dwarfs ($\lesssim 0.5 M_\odot$) can be affected by the XUV (X rays + extreme UV) emission of these stars, with flares occasionally increasing the XUV flux by more than 2 orders of magnitude above quiescent levels. This wavelength range can warm and ionize terrestrial planets' upper atmospheres, which expands the planetary radius and promotes atmospheric loss. In this work, we study the contribution of the XUV flux due to flares on the atmospheric escape of Earth-like planets orbiting M dwarfs through numerical simulations. We considered the first Gyr of planets with initial surface water abundances between 1 and 10 terrestrial oceans (TO), a small primordial hydrogen envelope ($\le$ $10^{-3}$~$M_{\oplus}$), and with host star masses between 0.2 and 0.6 $M_{\odot}$. In this parameter range, we find that flares can remove up to two TO more than nonflaring stars, which, in some cases, translates to a doubling of the total water loss. We also find that flaring can increase atmospheric oxygen partial pressures by hundreds of bars in some cases. These results were obtained by adding a new module for flares to the \vplanet software package and upgrading its atmospheric escape module to account for Roche lobe overflow and radiation/recombination-limited escape. 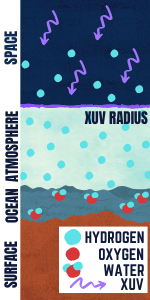