SDSS-IV MaNGA: the chemical co-evolution of gas and stars in spiral galaxies

We investigate archaeologically how the metallicity in both stellar and gaseous components of spiral galaxies of differing masses evolve with time, using data from the SDSS-IV MaNGA survey. For the stellar component, we can measure this evolution directly by decomposing the galaxy absorption-line spectra into populations of different ages and determining their metallicities. For the gaseous component, we can only measure the present-day metallicity directly from emission lines. However, there is a well-established relationship between gas metallicity, stellar mass, and star formation rate which does not evolve significantly with redshift; since the latter two quantities can be determined directly for any epoch from the decomposition of the absorption-line spectra, we can use this relationship to infer the variation in gas metallicity over cosmic time. Comparison of present-day values derived in this way with those obtained directly from the emission lines confirms the validity of the method. Application of this approach to a sample of 1619 spiral galaxies reveals how the metallicity of these systems has changed over the last 10 billion yr since cosmic noon. For lower-mass galaxies, both stellar and gaseous metallicity increase together, as one might expect in well-mixed fairly isolated systems. In higher-mass systems, the average stellar metallicity has not increased in step with the inferred gas metallicity, and actually decreases with time. Such disjoint behaviour is what one might expect if these more massive systems have accreted significant amounts of largely pristine gas over their lifetimes, and this material has not been well mixed into the galaxies. 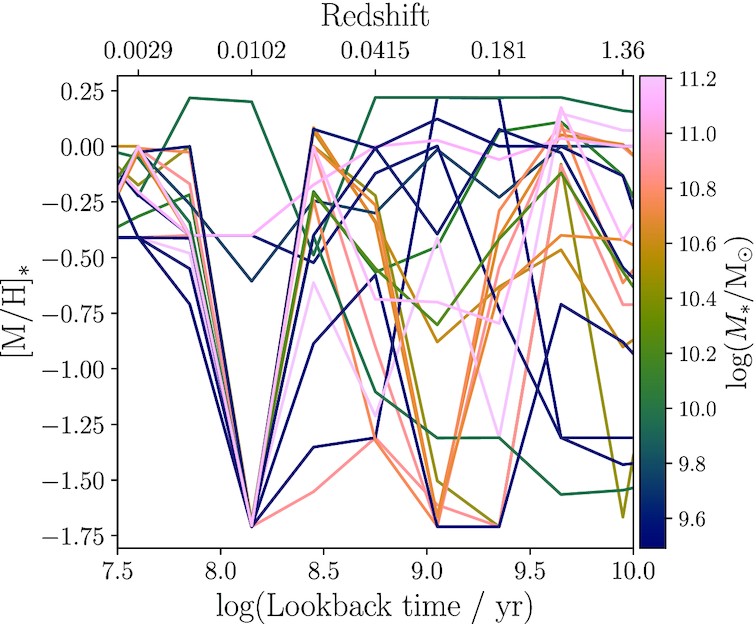