Study of 2021 outburst of the recurrent nova RS Ophiuchi: Photoionization and morphokinematic modelling

We present the evolution of the optical spectra of the 2021 outburst of RS Ophiuchi (RS Oph) over about a month after the outburst. The spectral evolution is similar to the previous outbursts. Early spectra show prominent P Cygni profiles of hydrogen Balmer, Fe II, and He I lines. The emission lines were very broad during the initial days, which later became narrower and sharper as the nova evolved. This is interpreted as the expanding shocked material into the winds of the red giant companion. We find that the nova ejecta expanded freely for ~4 d, and afterwards, the shock velocity decreased monotonically with time as v ∝ t-0.6. The physical and chemical parameters associated with the system are derived using the photoionization code CLOUDY. The best-fitting CLOUDY model shows the presence of a hot central white dwarf source with a roughly constant luminosity of ~1.00 × 1037 erg s-1. The best-fitting photoionization models yield absolute abundance values by number, relative to solar of He/H ~1.4-1.9, N/H = 70-95, O/H = 0.60-2.60, and Fe/H ~1.0-1.9 for the ejecta during the first month after the outburst. Nitrogen is found to be heavily overabundant in the ejecta. The ejected hydrogen shell mass of the system is estimated to be in the range of $3.54 - 3.83 \times 10^{-6}\, {\rm M}_{\odot }$. The 3D morphokinematic modelling shows a bipolar morphology and an inclination angle of i = 30° for the RS Oph binary system. 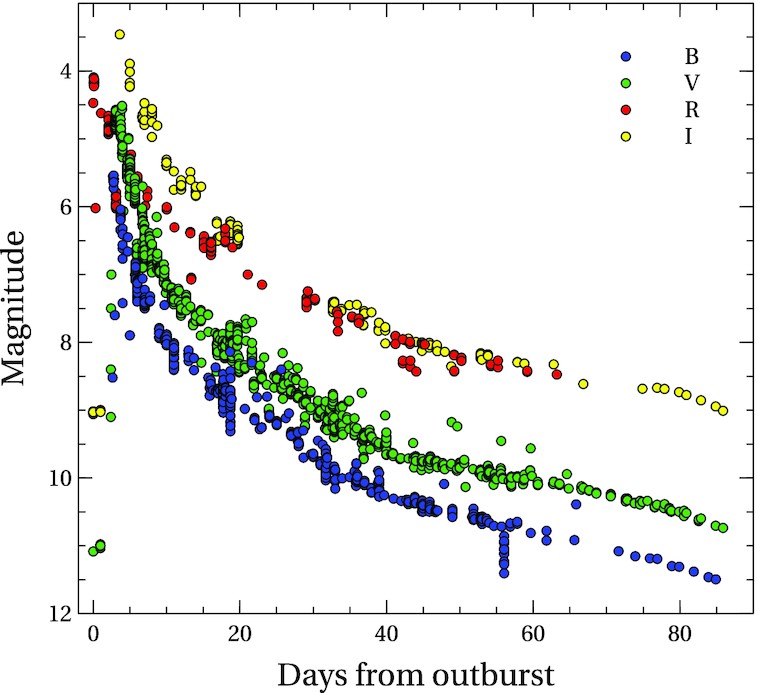