The CMB lensing signal from cosmic voids and superclusters probes the growth of structure in the low-redshift cosmic web. In this analysis, we cross-correlated the Planck CMB lensing map with voids detected in the Dark Energy Survey Year 3 (Y3) data set (~5000 deg2), expanding on previous measurements that used Y1 catalogues (~1300 deg2). Given the increased statistical power compared to Y1 data, we report a 6.6σ detection of negative CMB convergence (κ) imprints using approximately 3600 voids detected from a redMaGiC luminous red galaxy sample. However, the measured signal is lower than expected from the MICE N-body simulation that is based on the ΛCDM model (parameters Ωm = 0.25, σ8 = 0.8), and the discrepancy is associated mostly with the void centre region. Considering the full void lensing profile, we fit an amplitude $A_{\kappa }=\kappa _{{\rm DES}}/\kappa _{{\rm MICE}}$ to a simulation-based template with fixed shape and found a moderate 2σ deviation in the signal with Aκ ≍ 0.79 ± 0.12. We also examined the WebSky simulation that is based on a Planck 2018 ΛCDM cosmology, but the results were even less consistent given the slightly higher matter density fluctuations than in MICE. We then identified superclusters in the DES and the MICE catalogues, and detected their imprints at the 8.4σ level; again with a lower-than-expected Aκ = 0.84 ± 0.10 amplitude. The combination of voids and superclusters yields a 10.3σ detection with an Aκ = 0.82 ± 0.08 constraint on the CMB lensing amplitude, thus the overall signal is 2.3σ weaker than expected from MICE. 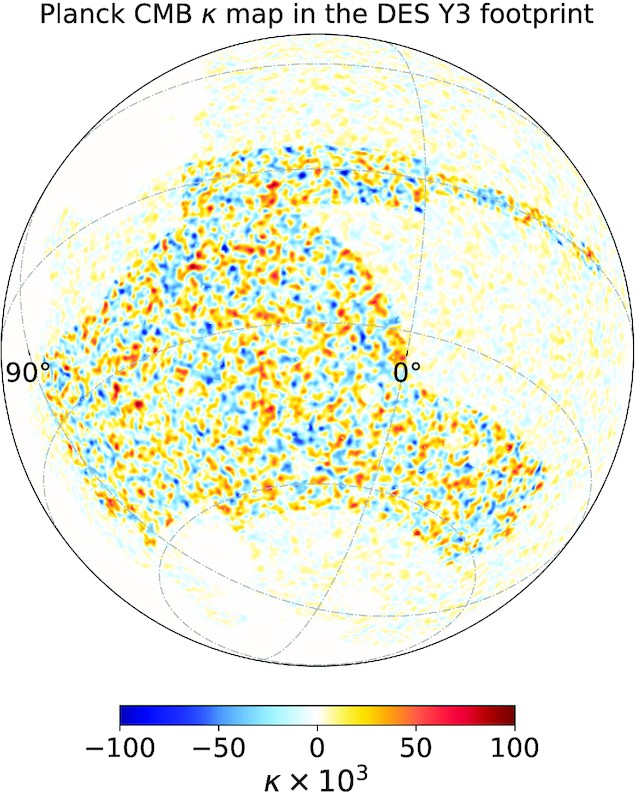