A mid-infrared study of superluminous supernovae

We present the mid-infrared (MIR) light curves (LC) of 10 superluminous supernovae (SLSNe) at z < 0.12 based on WISE data at 3.4 and 4.6 $\mu$m. Three of them, including PS15br, SN 2017ens, and SN 2017err show rebrightening which started at 200-400 d and ended at 600-1000 d, indicating the presence of dust. In four of the left seven SLSNe, dust emission was detected with monochromatic luminosities of $10^7\sim 10^8\, {\rm L}_\odot$ at epochs of 100-500 d based on MIR colours W1 - W2 ~ 1. Among the three SLSNe which show rebrightening, we further analysed PS15br and SN 2017ens. We modelled the SEDs at 500-700 d, which gives dust temperatures of 600-1100 K, dust masses of $\gtrsim 10^{-2}\, {\rm M}_\odot$, and luminosities of $10^8\sim 10^9\, {\rm L}_\odot$. Considering the time delay and the huge amount of energy released, the emitting dust can hardly be pre-existing dust heated whether collisionally by shocks or radiatively by peak SLSN luminosity or shock emission. Instead, it can be newly formed dust additionally heated by the interaction of circumstellar medium, indicated by features in their spectra and slowly declining bolometric LCs. The dust masses appear to be ten times greater than those formed in normal core-collapse supernovae at similar epochs. Combining with the analysis of SN 2018bsz by Chen et al. (2021), we suggest that SLSNe have higher dust formation efficiency, although future observations are required to reach a final conclusion. 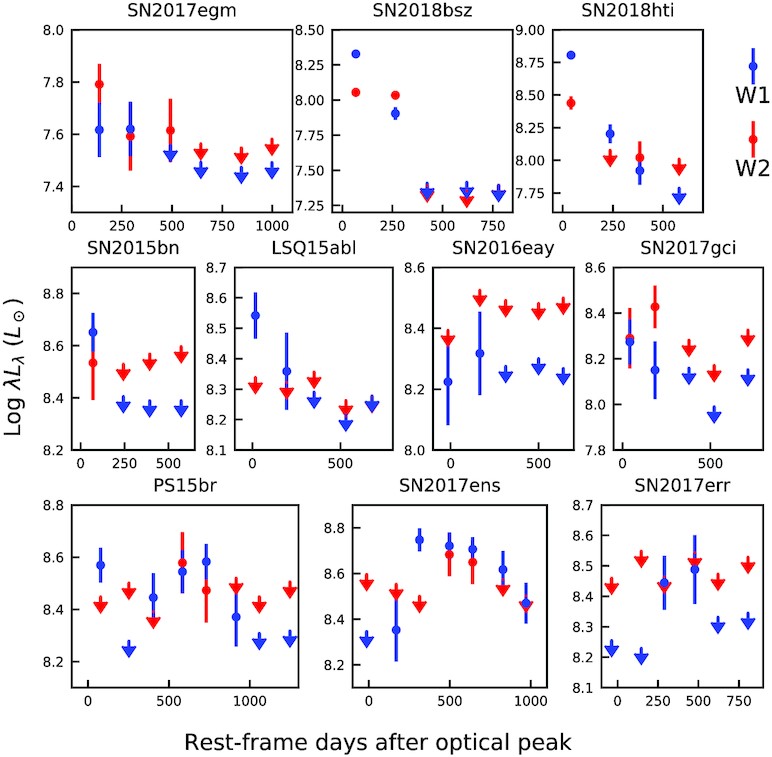