Structure and kinematics of tidally limited satellite galaxies in LCDM

We use N-body simulations to model the tidal evolution of dark matter-dominated dwarf spheroidal galaxies embedded in cuspy Navarro-Frenk-White subhaloes. Tides gradually peel off stars and dark matter from a subhalo, trimming it down according to their initial binding energy. This process strips preferentially particles with long orbital times, and comes to an end when the remaining bound particles have crossing times shorter than a fraction of the orbital time at pericentre. The properties of the final stellar remnant thus depend on the energy distribution of stars in the progenitor subhalo, which in turn depends on the initial density profile and radial segregation of the initial stellar component. The stellar component may be completely dispersed if its energy distribution does not extend all the way to the subhalo potential minimum, although a bound dark remnant may remain. These results imply that 'tidally limited' galaxies, defined as systems whose stellar components have undergone substantial tidal mass-loss, neither converge to a unique structure nor follow a single tidal track. On the other hand, tidally limited dwarfs do have characteristic sizes and velocity dispersions that trace directly the characteristic radius (rmx) and circular velocity (Vmx) of the subhalo remnant. This result places strong upper limits on the size of satellites whose unusually low velocity dispersions are often ascribed to tidal effects. In particular, the large size of kinematically cold 'feeble giant' satellites like Crater 2 or Antlia 2 cannot be explained as due to tidal effects alone in the Lambda Cold Dark Matter scenario. 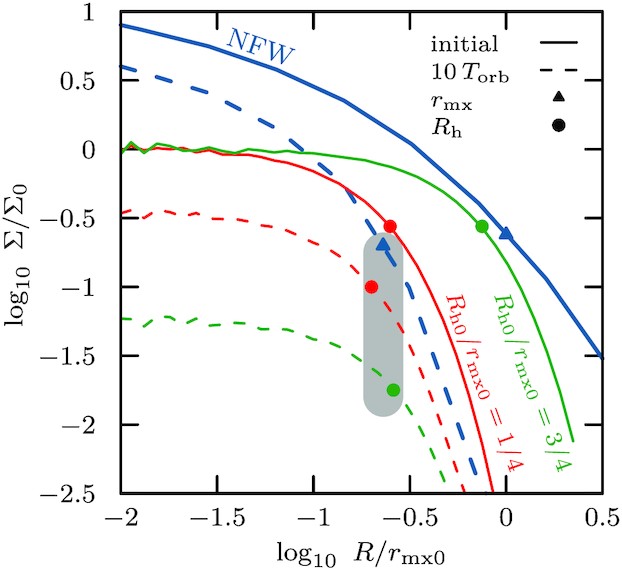