Haro 11 - Untying the knots of the nuclear starburst

Star formation is a clustered process that regulates the structure and evolution of galaxies. We investigate this process in the dwarf galaxy Haro 11, forming stars in three knots (A, B, and C). The exquisite resolution of HST imaging allows us to resolve the starburst into tens of bright star clusters. We derive masses between 105 and $10^7\, \rm M_{\odot }$ and ages younger than 20 Myr, using photometric modelling. We observe that the clustered star formation has propagated from knot C (the oldest) through knot A (in between) towards knot B (the youngest). We use aperture-matched ultraviolet and optical spectroscopy (HST + MUSE) to independently study the stellar populations of Haro 11 and determine the physical properties of the stellar populations and their feedback in 1-kpc diameter regions. We discuss these results in light of the properties of the ionized gas within the knots. We interpret the broad blue-shifted components of the optical emission lines as outflowing gas (vmax ~ 400 km/s). The strongest outflow is detected in knot A with a mass rate of $\dot{M}_{\mathrm{ out}}\sim 10\, \rm M_{\odot }/yr$, 10 times higher than the star formation in the same region. Knot B hosts a young and not fully developed outflow, whereas knot C has likely been already evacuated. Because Haro 11 has properties similar to high-redshift unresolved galaxies, our work can additionally aid the understanding of star formation at high redshift, a window that will be opened by upcoming facilities. 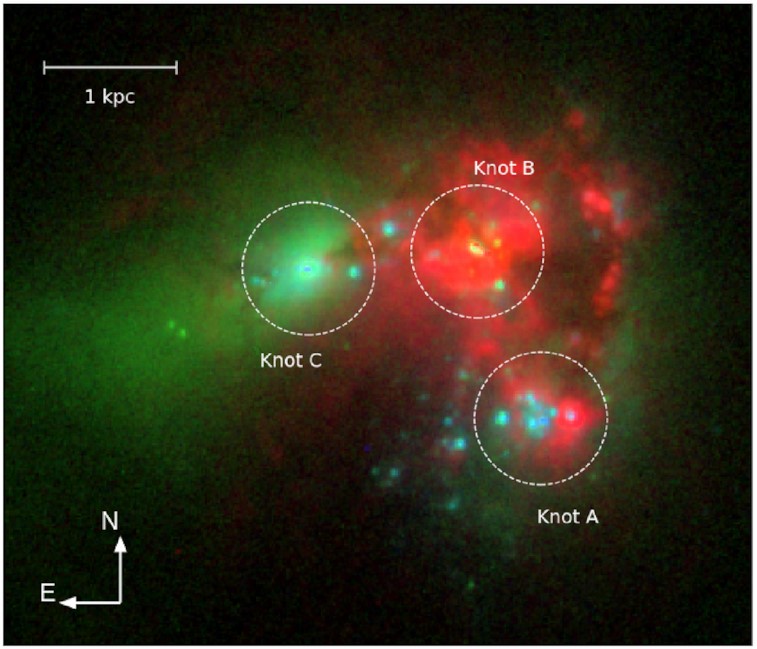