We report the detection of radio emission from the known X-ray flaring star EXO 040830-7134.7 during Karoo Array Telescope (MeerKAT) observations of the nearby cataclysmic variable VW Hydri. We have three epochs of MeerKAT observations, where the star is not detected in the first epoch, is detected in the second epoch, and is marginally detected in the third epoch. We cannot distinguish whether the detection is quiescent emission or a transient radio burst. If we assume that the radio detection is quiescent emission, the source lies somewhat to the right of the Güdel-Benz relation; however, if we assume that the upper limit on the radio non-detection is indicative of the quiescent emission, then the source lies directly on the relation. Both cases are broadly consistent with the relation. We use archival spectral energy distribution data and new Southern African Large Telescope high-resolution spectroscopy to confirm that EXO 040830-7134.7 is a chromospherically active M-dwarf with a temperature of 4000 ± 200 K of spectral type M0V. We use All-Sky Automated Survey (ASAS), All-Sky Automated Survey for Supernovae (ASAS-SN), and Transiting Exoplanet Survey Satellite (TESS) optical photometry to derive an improved rotational period of 5.18 ± 0.04 d. This is the first radio detection of the source, and the first MeerKAT detection of an M-dwarf. 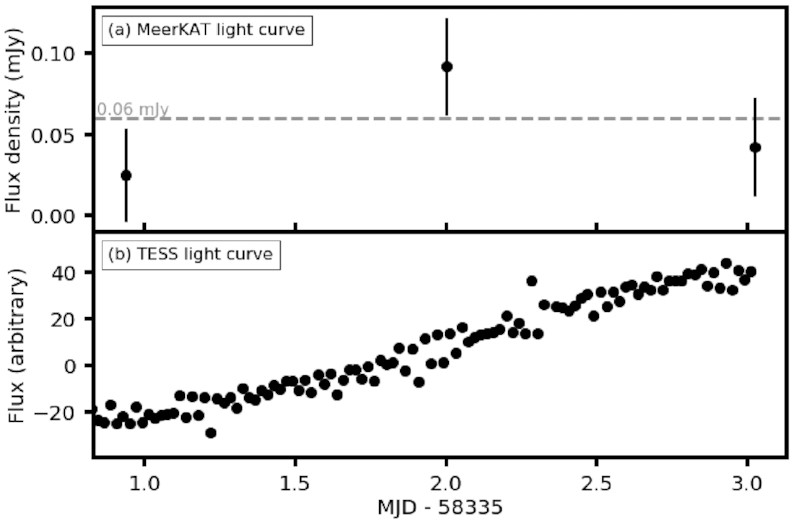