The mean free path approximation and stellar collisions in star clusters: numerical exploration of the analytic rates and the role of perturbations on binary star mergers

In this paper, we compute predictions for the number of stellar collisions derived from analytic models based on the mean free path (MFP) approximation and compare them to the results of N-body simulations. Our goal is to identify the cluster conditions under which the MFP approximation remains valid. Adopting a range of particle numbers (100 ≤ N ≤ 5000) and different combinations of particle masses and radii, we explore three different channels leading to stellar collisions, all of which are expected to occur in realistic stellar environments. At high densities, binaries form from isolated three-body interactions of single stars. Hence, we consider collisions between single stars and collisions involving binary stars, after they form in our simulations. For the latter, we consider two channels for mergers, namely direct stellar collisions during chaotic single-binary interactions and perturbation-driven mergers of binaries due to random walks in eccentricity approaching unity. In the densest systems considered here, a very massive object is formed at the cluster centre, causing local stellar orbits to become increasingly Keplerian and the assumptions going into our analytic model to break down. Before reaching this limit, we obtain excellent agreement between our theoretical predictions and the simulations: The analytic rates are typically accurate to within one standard deviation for the entire parameter space considered here, but the agreement is best for short integration times. Our results have direct implications for blue straggler formation in dense star clusters, and stellar mergers in galactic nuclei hosting massive black holes. 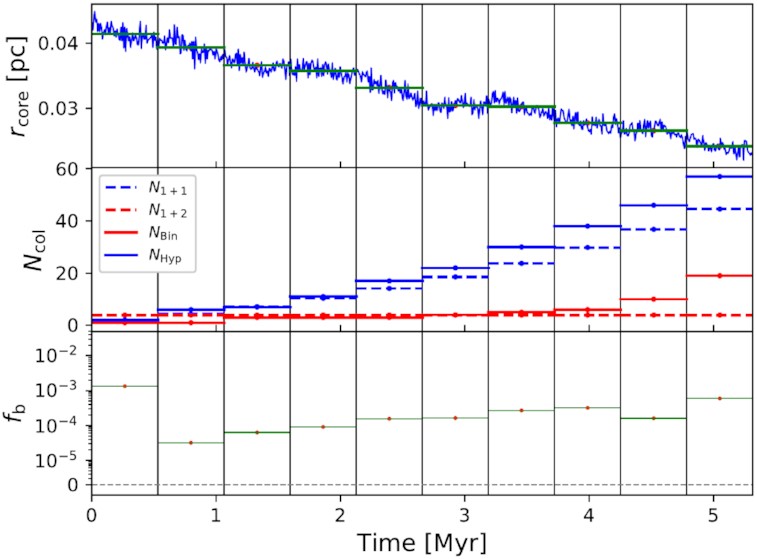