Walk on the Low Side: LOFAR Explores the Low-frequency Radio Emission of GASP Jellyfish Galaxies

Jellyfish galaxies, characterized by long filaments of stripped interstellar medium extending from their disks, are the prime laboratories to study the outcomes of ram pressure stripping. At radio wavelengths, they often show unilateral emission extending beyond the stellar disk, and an excess of radio luminosity with respect to that expected from their current star formation rate. We present new 144 MHz images provided by the LOFAR Two-metre Sky Survey for a sample of six galaxies from the GASP survey. These galaxies are characterized by a high global luminosity at 144 MHz (6-27 × 1022 W Hz-1), in excess compared to their ongoing star formation rate. The comparison of radio and Hα images smoothed with a Gaussian beam corresponding to ~10 kpc reveals a sublinear spatial correlation between the two emissions with an average slope of k = 0.50. In their stellar disk we measure k = 0.77, which is close to the radio-to-star formation linear relation. We speculate that, as a consequence of the ram pressure, in these jellyfish galaxies cosmic ray transport is more efficient than in normal galaxies. Radio tails typically have higher radio-to-Hα ratios than the disks, thus we suggest that the radio emission is boosted by electrons stripped from the disks. In all galaxies, the star formation rate has decreased by a factor ≤10 within the last ~108 yr. The observed radio emission is consistent with the past star formation, so we propose that this recent decline may be the cause of their radio luminosity-to-star formation rate excess. 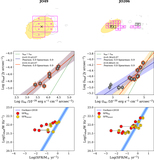