Massive binaries play an important role in fields ranging from gravitational-wave astronomy to stellar evolution. We provide several lines of evidence that classical OBe stars in the Small Magellanic Cloud (SMC) obtain their rapid rotation from mass and angular momentum transfer in massive binaries, which predicts that the subsequent supernovae should often eject OBe stars into the field. We find that (1) OBe stars have a higher field frequency than OB stars; (2) our cumulative distribution function (CDF) of stellar distances from O stars shows that OBe stars are indeed much more isolated than ordinary OB stars of corresponding spectral types; (3) the CDFs of OBe stars approach that of high-mass X-ray binaries (HMXBs), which are confirmed post-supernova objects; and (4) Oe stars are as isolated from clusters as Be stars, implying that their final masses are relatively independent of their initial masses, consistent with major mass transfer. Lastly, we also find that the spatial distribution of supergiant OBe stars differs from that of classical OBe stars, consistent with the different mechanisms responsible for their emission-line spectra. 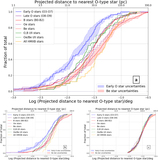