The solar wind measured in situ by Parker Solar Probe in the very inner heliosphere is studied in combination with the remote-sensing observation of the coronal source region provided by the METIS coronagraph aboard Solar Orbiter. The coronal outflows observed near the ecliptic by Metis on 2021 January 17 at 16:30 UT, between 3.5 and 6.3 R ⊙ above the eastern solar limb, can be associated with the streams sampled by PSP at 0.11 and 0.26 au from the Sun, in two time intervals almost 5 days apart. The two plasma flows come from two distinct source regions, characterized by different magnetic field polarity and intensity at the coronal base. It follows that both the global and local properties of the two streams are different. Specifically, the solar wind emanating from the stronger magnetic field region has a lower bulk flux density, as expected, and is in a state of well-developed Alfvénic turbulence, with low intermittency. This is interpreted in terms of slab turbulence in the context of nearly incompressible magnetohydrodynamics. Conversely, the highly intermittent and poorly developed turbulent behavior of the solar wind from the weaker magnetic field region is presumably due to large magnetic deflections most likely attributed to the presence of switchbacks of interchange reconnection origin. 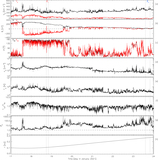