Are the Magnetic Field Directions of Surrounding Loops a Key Parameter for Confining a Solar Filament Eruption?

Using high-resolution Hα data from the 1 m New Vacuum Solar Telescope, combined with multiband Atmospheric Imaging Assembly extreme ultraviolet observations and Helioseismic and Magnetic Imager light-of-sight magnetograms from the Solar Dynamical Observatory, we study a quiet-Sun filament eruption on 2019 November 1. During the erupting process, the filament was blocked by at least three sets of surrounding loops (L1-L3). The magnetic field direction of L2 is opposite to that of the top segment of the erupting filament. While the top segment contacted L2, a current sheet formed between L2 and the top segment. Then, magnetic reconnection took place, resulting in the destruction of L2 and the filament. On the other hand, the magnetic field direction of L1 is the same as that of the left leg of the erupting filament, and that of L3 is the same as that of the right leg. The left leg expanded eastward and met L1, then it stopped. The right leg expanded westward and collided with L3. It rebounded and finally stopped at the interaction region. These observations imply that the magnetic field directions of the surrounding magnetic structures are a key parameter for confining a filament eruption. While the field direction of a surrounding structure is the same as that of an eruptive filament, the filament is confined. 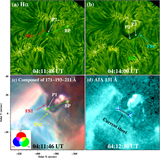