This is the fourth paper exploring the infrared properties of giant H II regions with the FORCAST instrument on the Stratospheric Observatory For Infrared Astronomy (SOFIA). Our survey utilizes the census of 56 Milky Way giant H II regions identified by Conti & Crowther, and in this paper we present the 20 and 37 μm imaging data we obtained from SOFIA for sources Sgr D and W42. Based upon the SOFIA data and other multiwavelength data, we derive and discuss the detailed physical properties of the individual compact sources and subregions as well as the large-scale properties of Sgr D and W42. However, improved measurements have revealed much closer distances to both regions than previously believed, and consequently, both sources are not powerful enough to be considered giant H II regions any longer. Motivated by this, we revisit the census of giant H II regions, performing a search of the last two decades of literature to update each source with the most recent and/or most accurate distance measurements. Based on these new distance estimates, we determine that 14 sources in total (25%) are at sufficiently reliable and closer distances that they are not powerful enough to be considered giant H II regions. We briefly discuss the observational and physical characteristics specific to Sgr D and W42 and show that they have properties distinct from the giant H II regions previously studied as a part of this survey. 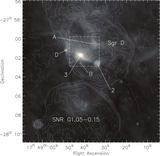