Quenching of Massive Disk Galaxies in the IllustrisTNG Simulation

A rare population of massive disk galaxies have been found to invade the red sequence dominated by early-type galaxies. The formation and origins of these red/quenched massive disk galaxies have recently gained great interest. The quenching mechanisms that are usually proposed, such as bar quenching and environment quenching, do not seem to be suitable for those bulgeless quenched disks in a low-density environment. In this paper, we use the TNG300 simulation to investigate the formation of massive quenched central disk galaxies. It is found that these galaxies contain less gas than their star-forming counterparts and harbor giant super massive black holes (SMBHs; above 108 M ⊙). By tracing their formation history, we found that quenched disk galaxies formed early and preserved disk morphology for cosmological timescales. They have experienced less than one major merger on average, and mini-mergers (mass ratio <1/10) have mainly contributed to the growth of their SMBHs. In the IllustrisTNG simulation, the black hole feedback mode switches from thermal to kinetic feedback when the black hole mass is more massive than ~108 M ⊙, which is more efficient to eject gas outside of the galaxy and to suppress further cooling of the hot gaseous halo. We conclude that the dominant quenching mechanism in massive red/quenched disk galaxies is kinetic active galactic nuclei feedback. 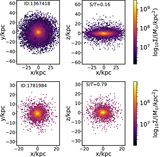