What's in a Name? Quantifying the Interplay between the Definition, Orientation, and Shape of Ultra-diffuse Galaxies Using the Romulus Simulations

We explore populations of ultra-diffuse galaxies (UDGs) in isolated, satellite, and cluster environments using the ROMULUS25 and ROMULUS C simulations, including how the populations vary with UDG definition and viewing orientation. Using a fiducial definition of UDGs, we find that isolated UDGs have notably larger semimajor (b/a) and smaller semiminor (c/a) axis ratios than their non-UDG counterparts, i.e., they are more oblate, or diskier. This is in line with previous results that adopted the same UDG definition and showed that isolated UDGs form via early, high-spin mergers. However, the choice of UDG definition can drastically affect what subsets of a dwarf population are classified as UDGs, changing the number of UDGs by up to ~45% of the dwarf population. We also find that a galaxy's classification as a UDG is dependent on its viewing orientation, and this dependence decreases as environmental density increases. Overall, we conclude that some definitions for UDGs used in the literature manage to isolate a specific formation mechanism for isolated dwarfs, while less restrictive definitions erase a link to the formation mechanism. Thus, how we define UDG populations must be considered if we want to understand the formation and evolution of UDGs. 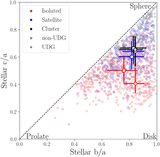