We explored simultaneous observations of chromospheric evaporation and condensation during the impulsive phase of a C6.7 flare on 2019 May 9. The solar flare was simultaneously observed by multiple instruments, i.e., the New Vacuum Solar Telescope (NVST), the Interface Region Imaging Spectrograph, the Atmospheric Imaging Assembly (AIA), Fermi, the Mingantu Spectral Radioheliograph, and the Nobeyama Radio Polarimeters. Using the single Gaussian fitting and the moment analysis technique, redshifted velocities at slow speeds of 15-19 km s-1 are found in the cool lines of C II and Si IV at one flare footpoint location. Redshifts are also seen in the Hα line-of-sight velocity image measured by NVST at double footpoints. Those redshifts with slow speeds can be regarded as the low-velocity downflows driven by the chromospheric condensation. Meanwhile, the converging motions from double footpoints to the loop top are found in the high-temperature EUV images, such as AIA 131, 94, and 335 Å. Their apparent speeds are estimated to be roughly 126-210 km s-1, which could be regarded as the high-velocity upflows caused by the chromospheric evaporation. The nonthermal energy flux is estimated to be about 5.7 × 1010 erg s-1 cm-2. The characteristic timescale is roughly equal to 1 minute. All these observational results suggest an explosive chromospheric evaporation during the flare impulsive phase. While a hard X-ray/microwave pulse and a type III radio burst are found simultaneously, indicating that the explosive chromospheric evaporation is driven by the nonthermal electron. 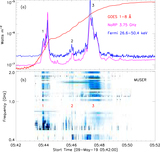