We present Hubble Space Telescope (HST) photometric results for NGC 6402, a highly reddened, very luminous Galactic globular cluster (GC). Recent spectroscopic observations of its red giant stars have shown a quite peculiar behavior in the chemistry of its multiple populations. These results have prompted UV and optical HST observations aimed at obtaining the cluster's "chromosome map" (ChM), an efficient tool for classifying GCs and characterizing their multiple populations. We find that the discontinuity in the abundance distributions of O, Mg, Al, and Na inferred from spectroscopy is more nuanced in the ChM, which is mostly sensitive to nitrogen. Nevertheless, photometry in optical bands reveals a double main sequence, indicating a discontinuity in the helium content of the populations. The population with the largest chemical anomalies (extreme) peaks at a helium mass fraction Y ~ 0.31. This helium content is consistent with results from the analysis of the distribution of horizontal branch stars and the spectrophotometry of the red giants. The ChM and the color-magnitude diagrams are compared with those of NGC 2808, a prototype GC with helium abundances up to Y ≳ 0.35, and both confirm that NGC 6402 does not host stellar populations with such extreme helium content. Further, the ChM reveals the presence of a group of stars with higher metallicity, thus indicating that NGC 6402 is a Type II cluster. The modalities of formation of the multiple populations in NGC 6402 are briefly surveyed, with main attention on the asymptotic giant branch and supermassive star models, and on possible cluster merging. 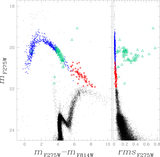