We present a survey for photometric variability in young, low-mass brown dwarfs with the Spitzer Space Telescope. The 23 objects in our sample show robust signatures of youth and share properties with directly imaged exoplanets. We present three new young objects: 2MASS J03492367+0635078, 2MASS J09512690-8023553, and 2MASS J07180871-6415310. We detect variability in 13 young objects, and find that young brown dwarfs are highly likely to display variability across the L2-T4 spectral type range. In contrast, the field dwarf variability occurrence rate drops for spectral types >L9. We examine the variability amplitudes of young objects and find an enhancement in maximum amplitudes compared to field dwarfs. We speculate that the observed range of amplitudes within a spectral type may be influenced by secondary effects such as viewing inclination and/or rotation period. We combine our new rotation periods with the literature to investigate the effects of mass on angular momentum evolution. While high-mass brown dwarfs (>30M Jup) spin up over time, the same trend is not apparent for lower-mass objects (<30M Jup), likely due to the small number of measured periods for old, low-mass objects. The rotation periods of companion brown dwarfs and planetary-mass objects are consistent with those of isolated objects with similar ages and masses, suggesting similar angular momentum histories. Within the AB Doradus group, we find a high-variability occurrence rate and evidence for common angular momentum evolution. The results are encouraging for future variability searches in directly imaged exoplanets with facilities such as the James Webb Space Telescope and 30 m telescopes. 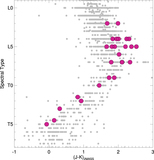