We present detections of stellar flares of Wolf 359, an M6.5 dwarf in the solar neighborhood (2.41 pc) known to be prone to flares due to surface magnetic activity. The observations were carried out from 2020 April 23 to 29 with a 1 m and a 0.5 m telescope separated by nearly 300 km in Xinjiang, China. In 27 hr of photometric monitoring, a total of 13 optical flares were detected, each with a total energy of ≳ 5 × 1029 erg. The measured event rate of about once every two hours is consistent with those reported previously in radio, X-ray, and optical wavelengths for this star. One such flare, detected by both telescopes on April 26, was an energetic event with a released energy of nearly 1033 erg. The two-telescope light curves of this major event sampled at different cadences and exposure timings enabled us to better estimate the intrinsic flare profile, which reached a peak of up to 1.6 times the stellar quiescent brightness, that otherwise would have been underestimated in the observed flare amplitudes of about 0.4 and 0.8, respectively, with single telescopes alone. The compromise between fast sampling so as to resolve a flare profile versus a longer integration time for a higher photometric signal-to-noise ratio provides a useful guidance in the experimental design of future flare observations. 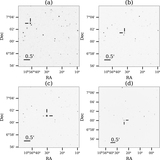