A graph-theory-based multi-scale analysis of hierarchical cascade in molecular clouds. Application to the NGC 2264 region

Context. The spatial properties of small star clusters suggest that they may originate from a fragmentation cascade starting from molecular cloud, of which there might be traces found at spatial scales up to a few tens of thousands of astronomical units (kAU).
Aims: Our goal is to investigate the multi-scale spatial structure of gas clumps, to probe the existence of a hierarchical cascade over a range of characteristic spatial scales, and to evaluate its possible link with star production in terms of multiplicity.
Methods: From the Berschel emission maps of NGC 2264 at [70, 160, 250, 350, 500] μm, clumps are extracted using getsf software at each of the associated spatial resolutions (respectively [8.4,13.5,18.2, 24.9,36.3]″). Using the spatial distribution of these clumps and the class 0/I young stellar object (YSO) from Spitzer data, we developed a graph-theoretic analysis to represent the multi-scale structure of the cloud as a connected network. This network is organised in levels, and each level represents a characteristic scale among the available spatial scales. A link is created between two nodes which could be either a clump or a YSO from two different levels if their footprints overlap with each other. A parent node is then associated with a child node from a lower scale. The way in which the network subdivides scale after scale is compared with a geometric model that we have developed. This model generates extended objects that have a particularity in that they are geometrically constrained and subdivide along the scales following a fractal law. This graph-theoretic representation allows us to develop new statistical metrics and tools aiming at characterising, in a quantitative way, the multi-scale nature of molecular clouds.
Results: We obtain three classes of multi-scale structure in NGC 2264 according to the number of nodes produced at the deepest level (called graph-sinks): hierarchical (several graph-sinks), linear (a single graph-sink with at most a single parent at each level), and isolated (no connection to any other node). The class of structure is strongly correlated with the column density NH2 of NGC 2264. The hierarchical structures dominate the regions whose column density exceeds NH2 = 6 × 1022 cm−2. Although the latter are in the minority, namely 23% of the total number of structures, they contain half of the class 0/I YSOs, proving that they are highly efficient in producing stars. We define a novel statistical metric, the fractality coefficient F, corresponding to the fractal index that an equivalent population of clumps would have if they were generated by an ideal fractal cascade. For NGC 2264, over the whole range of spatial scales (1.4-26 kAU), this coefficient is globally estimated to be F = 1.45 ± 0.12 and its dispersion suggests that the cascade may depend on local physical conditions. However, a single fractal index is not the best fit for the NGC 2264 data because the hierarchical cascade starts at a 13 kAU characteristic spatial scale.
Conclusions: Our novel methodology allows us to correlate YSOs with their gaseous environment which displays some degree of hierarchy for spatial scales below 13 kAU. We identify hierarchical multi-scale structures, which we associate with a hierarchical fragmentation process, and linear structures, which we associate with a monolithic fragmentation process. Hierarchical structures are observed as the main vectors of star formation. This cascade, which drives efficient star formation, is then suspected of being both hierarchical and rooted by the larger scale gas environment up to 13 kAU. We do not see evidence for any hierarchical structural signature of the cloud within the 13-26 kAU range, implying that the structure of the cloud does not follow a simple fractal law along the scales but instead might be submitted to a multi-fractal process. 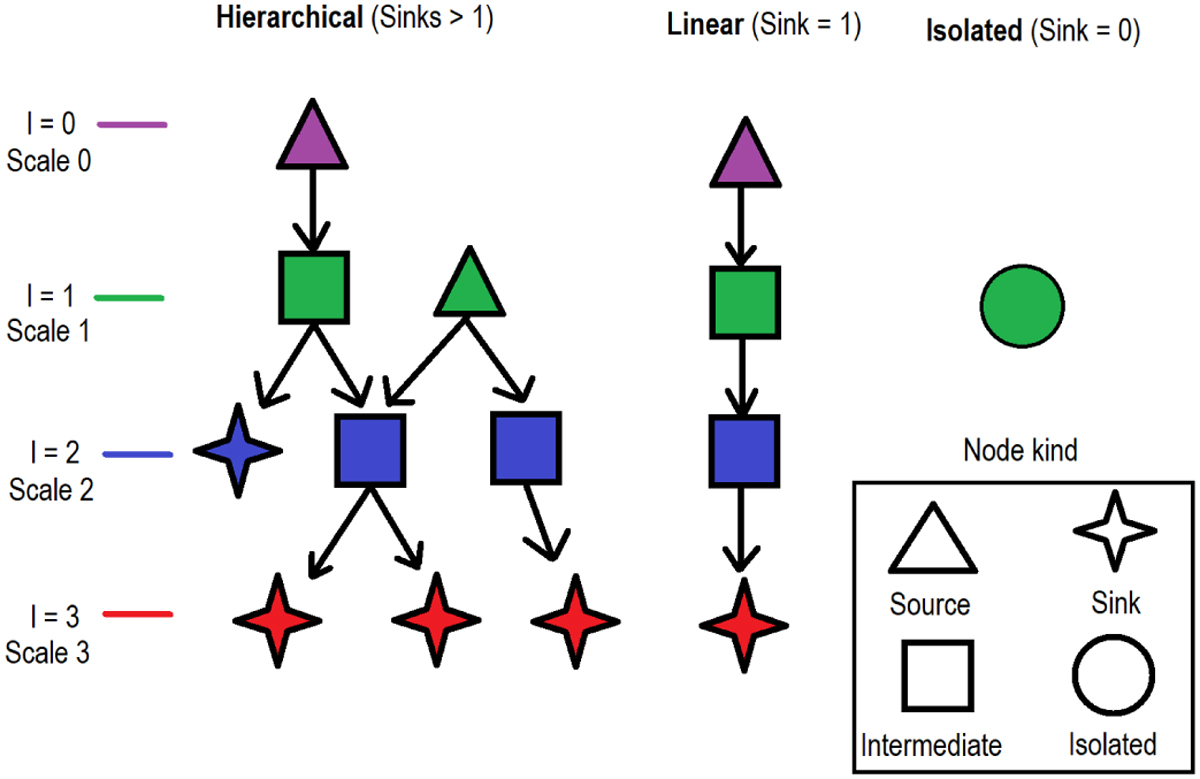