Aims: The processes that determine the stellar initial mass function (IMF) and its origin are critical unsolved problems, with profound implications for many areas of astrophysics. The W43-MM2&MM3 mini-starburst ridge hosts a rich young protocluster, from which it is possible to test the current paradigm on the IMF origin.
Methods: The ALMA-IMF Large Program observed the W43-MM2&MM3 ridge, whose 1.3 mm and 3 mm ALMA 12 m array continuum images reach a ~2500 au spatial resolution. We used both the best-sensitivity and the line-free ALMA-IMF images, reduced the noise with the multi-resolution segmentation technique MnGSeg, and derived the most complete and most robust core catalog possible. Using two different extraction software packages, getsf and GExt2D, we identified ~200 compact sources, whose ~100 common sources have, on average, fluxes consistent to within 30%. We filtered sources with non-negligible free-free contamination and corrected fluxes from line contamination, resulting in a W43-MM2&MM3 catalog of 205 getsf cores. With a median deconvolved FWHM size of 3400 au, core masses range from ~0.1 M⊙ to ~70 M⊙ and the getsf catalog is 90% complete down to 0.8 M⊙.
Results: The high-mass end of the core mass function (CMF) of W43-MM2&MM3 is top-heavy compared to the canonical IMF. Fitting the cumulative CMF with a single power-law of the form N(> log M) ∝ Mα, we measured α = −0.95 ± 0.04, compared to the canonical α = −1.35 Salpeter IMF slope. The slope of the CMF is robust with respect to map processing, extraction software packages, and reasonable variations in the assumptions taken to estimate core masses. We explore several assumptions on how cores transfer their mass to stars (assuming a mass conversion efficiency) and subfragment (defining a core fragment mass function) to predict the IMF resulting from the W43-MM2&MM3 CMF. While core mass growth should flatten the high-mass end of the resulting IMF, core fragmentation could steepen it.
Conclusions: In stark contrast to the commonly accepted paradigm, our result argues against the universality of the CMF shape. More robust functions of the star formation efficiency and core subfragmentation are required to better predict the resulting IMF, here suggested to remain top-heavy at the end of the star formation phase. If confirmed, the IMFs emerging from starburst events could inherit their top-heavy shape from their parental CMFs, challenging the IMF universality. 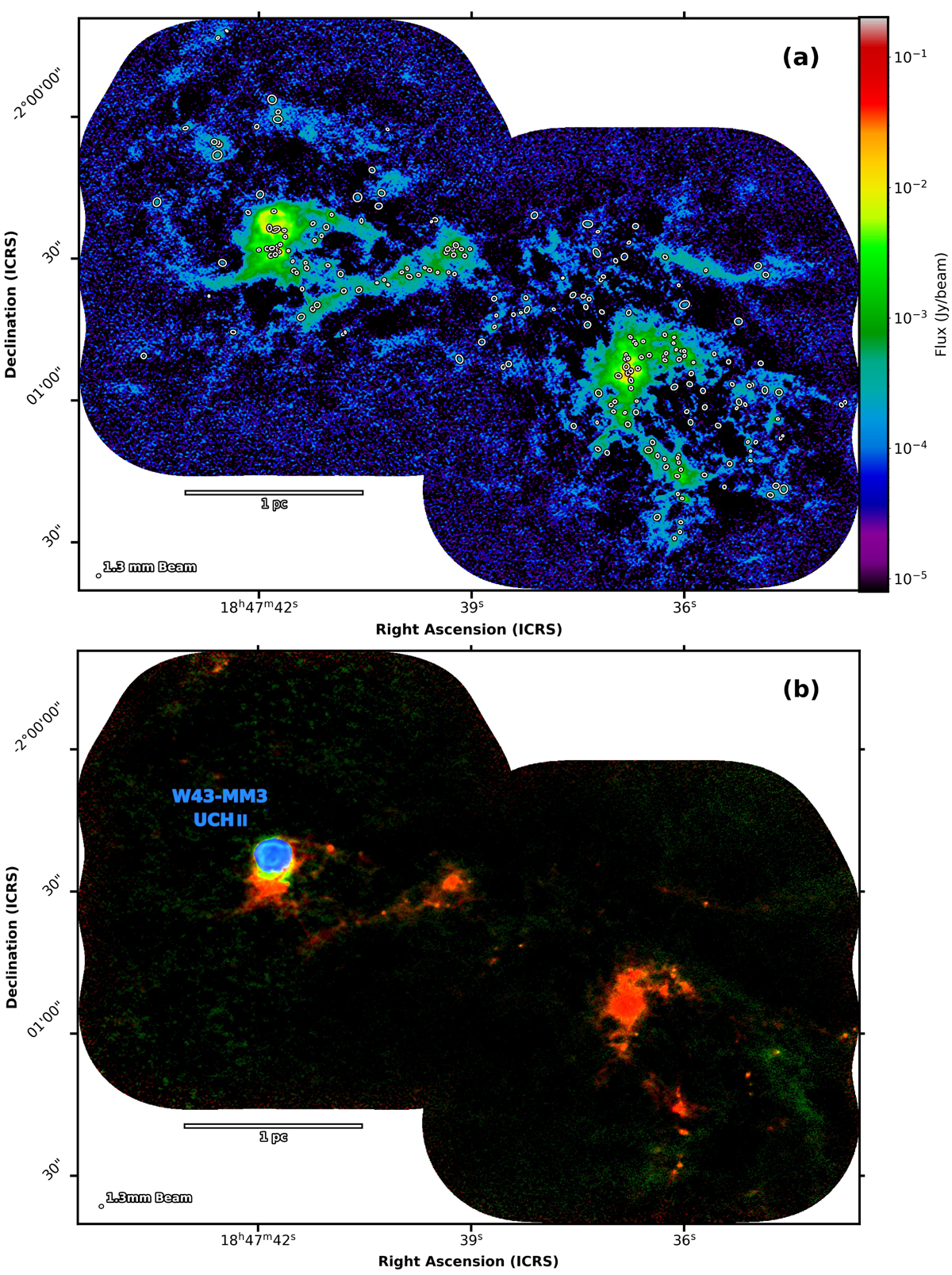