Dents in the Veil: protostellar feedback in Orion

Context. Interest in stellar feedback has recently increased because new studies suggest that radiative and mechanical feedback from young massive stars significantly regulates the physical and chemical composition of the interstellar medium. Recent SOFIA [C II] 158 μm observations of the Orion Veil have revealed that the expanding bubble is powered by stellar winds and influenced by previously active molecular outflows of ionizing massive stars.
Aims: We aim to investigate the mechanical feedback on the whole Veil shell by searching for jets and outflows that interact with the Veil shell and by determining the driving mechanisms of these collisions.
Methods: We make use of the [C II] 158 μm map of the Orion Nebula taken with the upGREAT instrument on board SOFIA. We image the [C II] emission of more extreme local standard of rest velocities (υLSR) between −3 and −20 km s−1 to pinpoint the high-velocity structures. Using position-velocity (PV) diagrams and high-velocity [C II] emission, we search for spots of shock-accelerated [C II]-emitting gas, so called dents. At these positions, we extract [C II] line profiles to identify velocity components. We also compare the intensity distribution of the [C II] emission with that of 8 μm PAH and 70 μm warm dust emission to see if there is a trend among these PDR tracers and to understand the origin of the dents.
Results: We identify six dents on the Veil shell, with sizes between 0.3 and 1.35 pc and expansion velocities ranging from 4 to 14 km s−1, relative to the expanding Veil shell. The [C II] line widths toward the dents vary from 4 to 16 km s−1 indicating that the dents are the result of interaction of the highly turbulent motions (e.g., shocked gas) with the Veil shell. Moreover, dents appear only in the [C II] PV diagram, not in the 12CO or HI 21 cm diagrams. Furthermore, the intensity distribution of the [C II] emission of the dents has a tight correlation with that of the 8 and 70 μm as long as the Orion Molecular Cloud or the Veil do not dominate its emission. Also, the observed dents do not have CO counterpart emission. These results indicate that the dents are made up of CO-dark H2 gas. In light of these findings, as well as the momenta of the dents and their dynamical timescales, we propose that the dents are created by the interaction of collimated jets and outflows from protostars in the Orion star-forming cloud with luminosities ranging from 103 to 104 L⊙, which indicates that they are B-type stars, with the surrounding Veil shell. However, it is challenging to pinpoint the driving stars as they may have moved from the original ejection points of the jets and outflows.
Conclusions: We conclude that the dynamics of the expanding Veil shell is influenced not just by the O-type stars in the Trapezium cluster, but also by less massive stars, especially B-type stars, in the Orion Nebula. Mechanical feedback from protostars with a range of masses appears to play an important role in determining the morphology of H II regions and injecting turbulence into the medium. 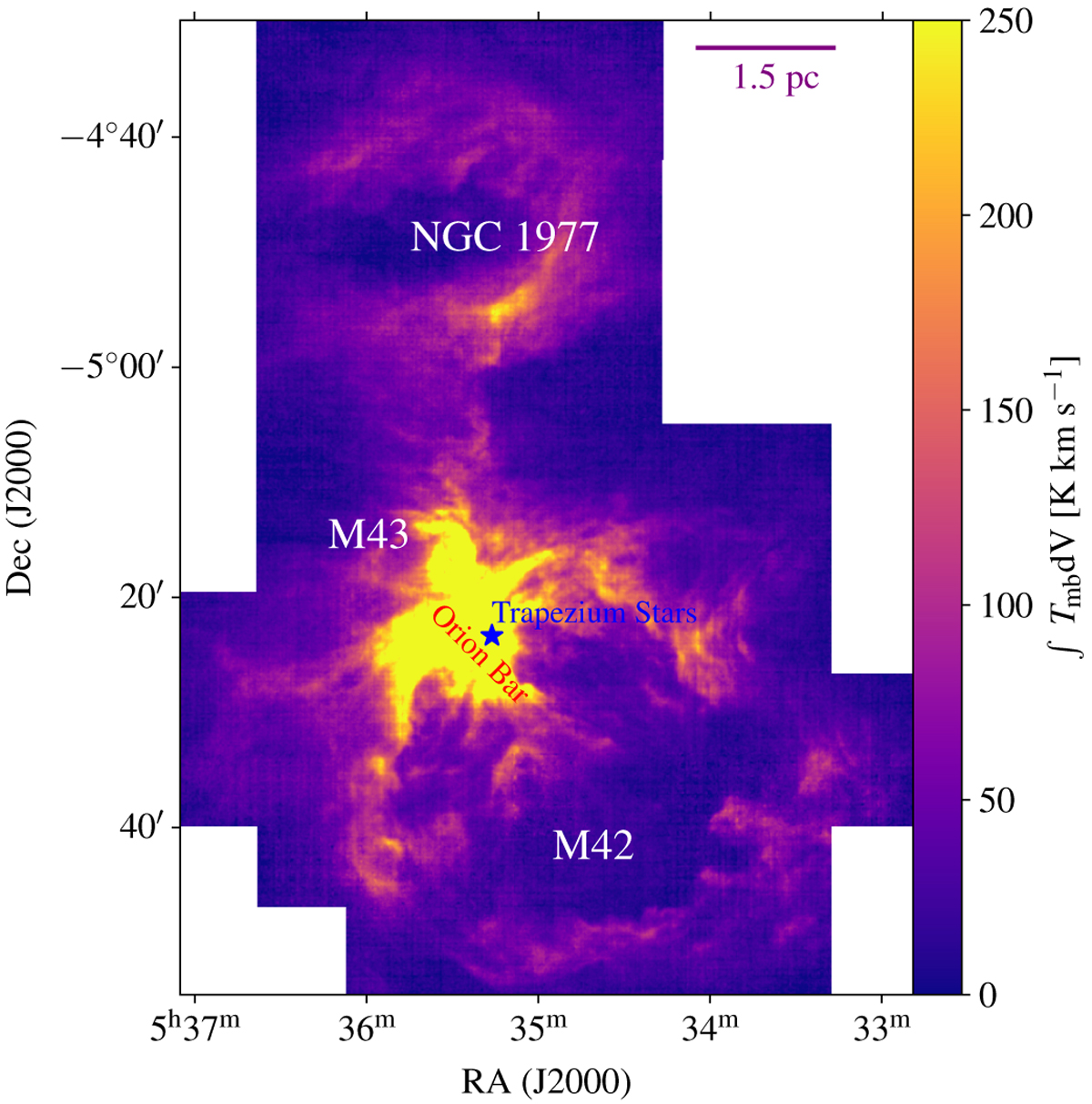