Chromospheric swirls. I. Automated detection in Hα observations and their statistical properties

Context. Chromospheric swirls are related to convectively driven vortex flows and considered to play a significant role in the dynamics and heating of the upper solar atmosphere. It is important to automatically detect and track them in chromospheric observations and determine their properties.
Aims: We aim to detect and track chromospheric swirls both in space and time by applying a newly developed novel automated method on high quality time series of Hα observations and to conduct a statistical analysis to determine their properties.
Methods: We applied a recently developed automated chromospheric swirl detection method to time-series observations of a quiet region of the solar chromosphere obtained in the Hα-0.2 Å wavelength of the Hα spectral line by the CRISP instrument at the Swedish 1-m Solar Telescope. The algorithm exploits the morphological characteristics of swirling events in high contrast chromospheric observations and results in the detection of these structures in each frame of the time series and their tracking over time. We conducted a statistical analysis to determine their various properties, including a survival analysis for deriving the mean lifetime.
Results: A mean number of 146 ± 9 swirls was detected within the Hα-0.2 Å field of view at any given time. The mean surface density is found equal to ∼0.08 swirls Mm−2 and the occurrence rate is ∼10−2 swirls Mm−2 min−1. These values are much higher than those previously reported from chromospheric observations. The radii of the detected swirls range between 0.5 and 2.5 Mm, with a mean value equal to 1.3 ± 0.3 Mm, which is slightly higher than previous reports. The lifetimes range between 1.5 min and 33.7 min (equal to the duration of the observations) with an arithmetic mean value of ∼8.5 min. A survival analysis of the lifetimes, however, using the Kaplan-Meier estimator in combination with a parametric model results in a mean lifetime of 10.3 ± 0.6 min.
Conclusions: Swirls are ubiquitous in the solar chromosphere. An automated method sheds more light on their abundance than visual inspection, while higher cadence, higher resolution observations will most probably result in the detection of a higher number of such features on smaller scales and with shorter lifetimes.

Movies is available at https://www.aanda.org 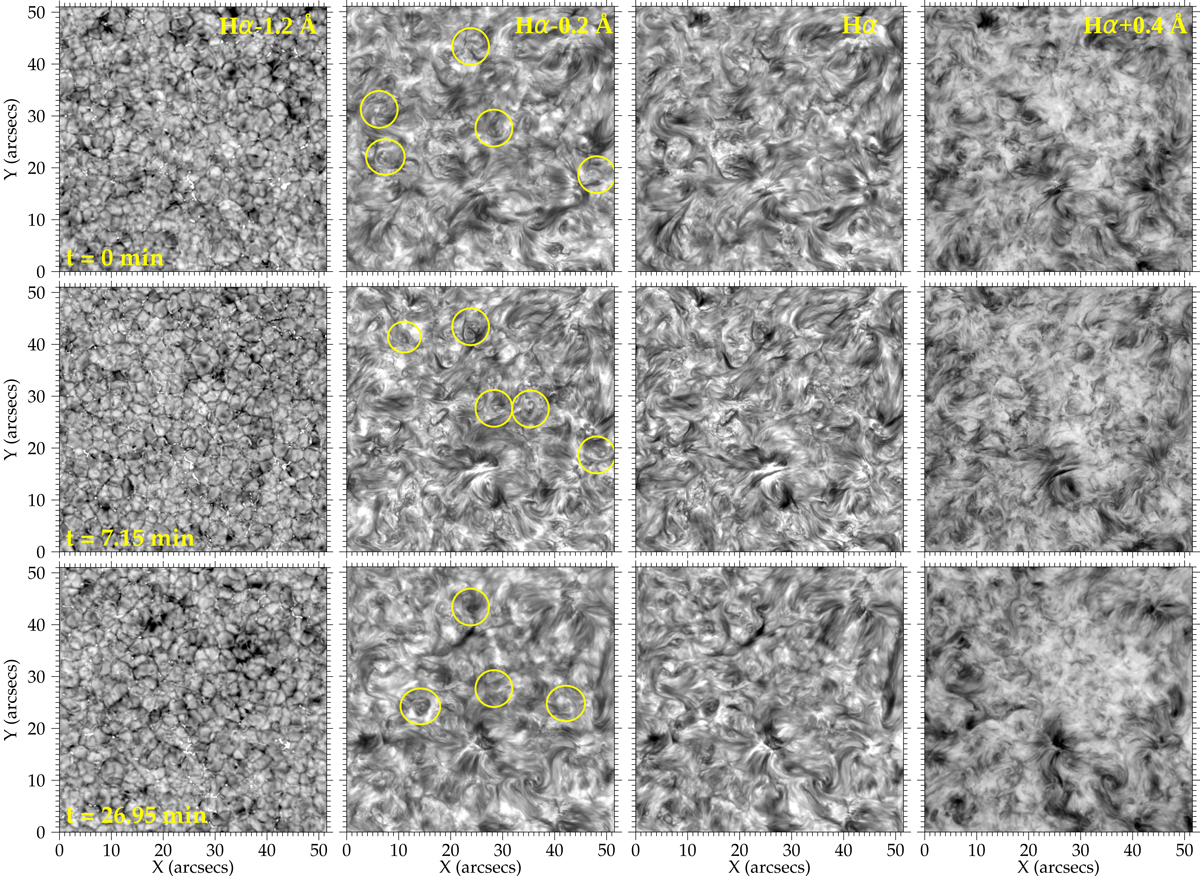