The eROSITA view of the Abell 3391/95 field: The Northern Clump. The largest infalling structure in the longest known gas filament observed with eROSITA, XMM-Newton, and Chandra

Context. Galaxy clusters grow through mergers and the accretion of substructures along large-scale filaments. Many of the missing baryons in the local Universe may reside in such filaments as the warm-hot intergalactic medium (WHIM).
Aims: SRG/eROSITA performance verification observations revealed that the binary cluster Abell 3391/3395 and the Northern Clump (the MCXC J0621.7-5242 galaxy cluster) are aligning along a cosmic filament in soft X-rays, similarly to what has been seen in simulations before. We aim to understand the dynamical state of the Northern Clump as it enters the atmosphere (3 × R200) of Abell 3391.
Methods: We analyzed joint eROSITA, XMM-Newton, and Chandra observations to probe the morphological, thermal, and chemical properties of the Northern Clump from its center out to a radius of 988 kpc (R200). We utilized the ASKAP/EMU radio data, the DECam optical image, and the Planck y-map to study the influence of the wide-angle tail (WAT) radio source on the Northern Clump's central intracluster medium. Using eROSITA data, we also analyzed the gas properties of the Northern Filament, the region between the virial radii of the Northern Clump and the A3391 cluster. From the Magneticum simulation, we identified an analog of the A3391/95 system along with an infalling group resembling the Northern Clump.
Results: The Northern Clump is a weak cool-core cluster centered on a WAT radio galaxy. The gas temperature over 0.2-0.5R500 is kBT500 = 1.99 ± 0.04 keV. We employed the mass-temperature (M - T) scaling relation and obtained a mass estimate of M500 = (7.68 ± 0.43) × 1013 M⊙ and R500 = (63 6 ± 12) kpc. Its X-ray atmosphere has a boxy shape and deviates from spherical symmetry. We identify a southern surface brightness edge, likely caused by subsonic motion relative to the filament gas in the southern direction. At ~R500, the southern atmosphere (infalling head) appears to be 42% hotter than its northern atmosphere. We detect a downstream tail pointing toward the north with a projected length of ~318 kpc, plausibly the result of ram pressure stripping. Through a two-temperature fit, we identify a cooler component in the Northern Filament with kBT = 0.68- 0.64+ 0.38 keV <!--inline-formula id="FI1"><alternatives><![CDATA[{k{B}}T = 0.68- 0.64+ 0.38{{keV}}]]>kBT=0.68−0.64+0.38keV<inline-graphic xmlns:xlink="http://www.w3.org/1999/xlink" id="img_eq1" mime-subtype="png" mimetype="image" xlink:href="aa41415-21-eq1.png"/></alternatives> and ne = 1.99-1.24+0.88 × 10-5cm-3, <!--inline-formula id="FI2"><alternatives><![CDATA[{n_e}1.99- 1.24+ 0.88 × {10- 5}{{c}}{{{m}}- 3}]]>ne1.99−1.24+0.88×10−5cm−3<inline-graphic xmlns:xlink="http://www.w3.org/1999/xlink" id="img_eq2" mime-subtype="png" mimetype="image" xlink:href="aa41415-21-eq2.png"/></alternatives> which are consistent within the expected ranges of WHIM properties. The analog group in the Magneticum simulation is experiencing changes in its gas properties and a shift between the position of the halo center and that of the bound gas, while approaching the main cluster pair.
Conclusions: The Northern Clump is a dynamically active system and far from being relaxed. Its atmosphere is affected by an interaction with the WAT and by gas sloshing or its infall toward Abell 3391 along the filament, consistent with the analog group-size halo in the Magneticum simulation. 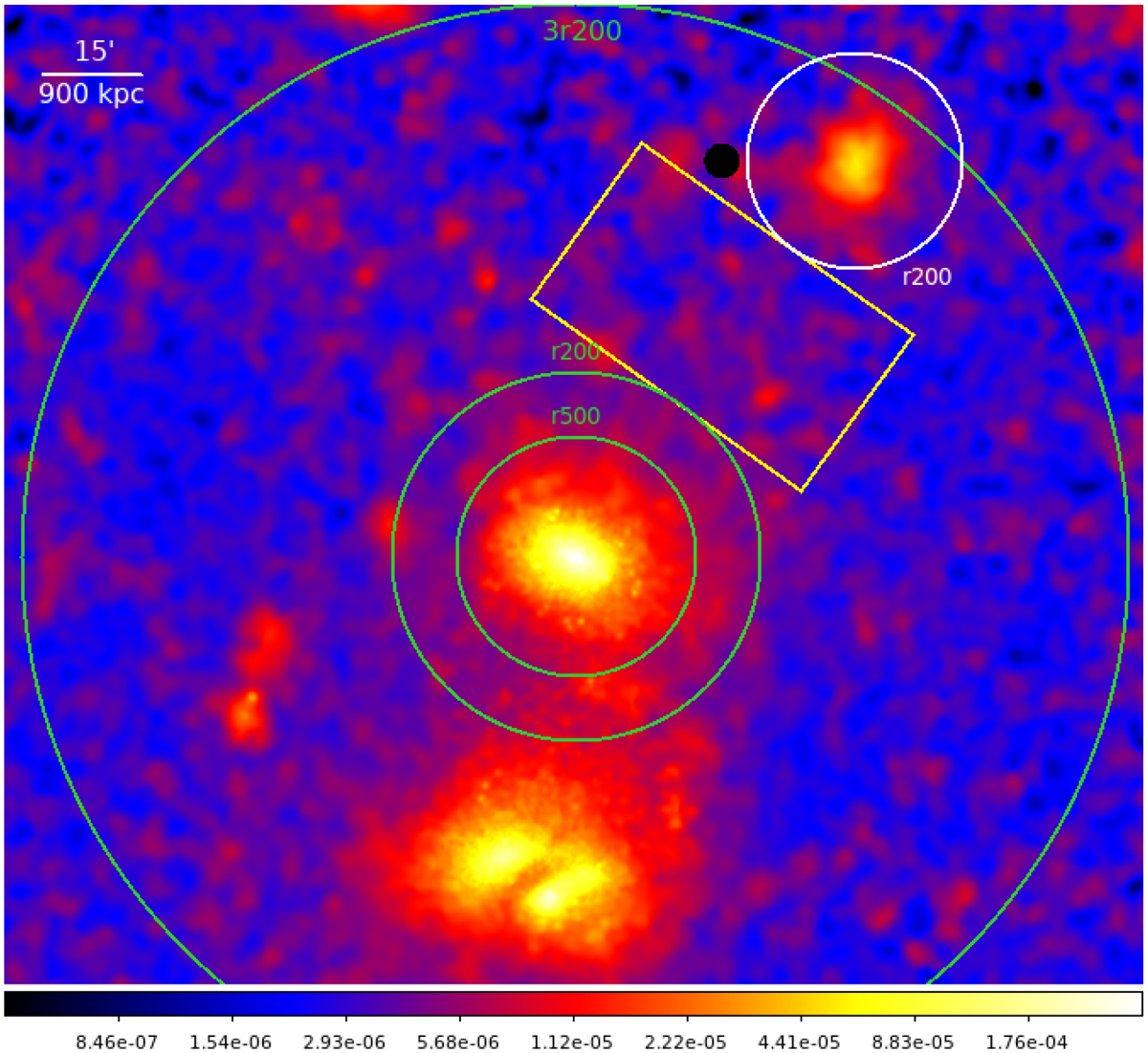