Aims: We investigate the physical properties - such as the stellar mass (M*), star-formation rate, infrared (IR) luminosity (LIR), X-ray luminosity (LX), and hydrogen column density (NH) - of mid-IR (MIR) galaxies and active galactic nuclei (AGN) at z < 4 in the 140 deg2 field observed by eROSITA on SRG using the Performance-and-Verification-Phase program named the eROSITA Final Equatorial Depth Survey (eFEDS).
Methods: By cross-matching the WISE 22 μm (W4)-detected sample and the eFEDS X-ray point-source catalog, we find that 692 extragalactic objects are detected by eROSITA. We have compiled a multiwavelength dataset extending from X-ray to far-IR wavelengths. We have also performed (i) an X-ray spectral analysis, (ii) spectral-energy-distribution fitting using X-CIGALE, (iii) 2D image-decomposition analysis using Subaru Hyper Suprime-Cam images, and (iv) optical spectral fitting with QSFit to investigate the AGN and host-galaxy properties. For 7088 WISE 22 μm objects that are undetected by eROSITA, we have performed an X-ray stacking analysis to examine the typical physical properties of these X-ray faint and probably obscured objects.
Results: We find that (i) 82% of the eFEDS-W4 sources are classified as X-ray AGN with log LX > 42 erg s−1 ; (ii) 67 and 24% of the objects have log(LIR/L⊙) > 12 and 13, respectively; (iii) the relationship between LX and the 6 μm luminosity is consistent with that reported in previous works; and (iv) the relationship between the Eddington ratio and NH for the eFEDS-W4 sample and a comparison with a model prediction from a galaxy-merger simulation indicates that approximately 5.0% of the eFEDS-W4 sources in our sample are likely to be in an AGN-feedback phase, in which strong radiation pressure from the AGN blows out the surrounding material from the nuclear region.
Conclusions: Thanks to the wide area coverage of eFEDS, we have been able to constrain the ranges of the physical properties of the WISE 22 μm-selected sample of AGNs at z < 4, providing a benchmark for forthcoming studies on a complete census of MIR galaxies selected from the full-depth eROSITA all-sky survey. 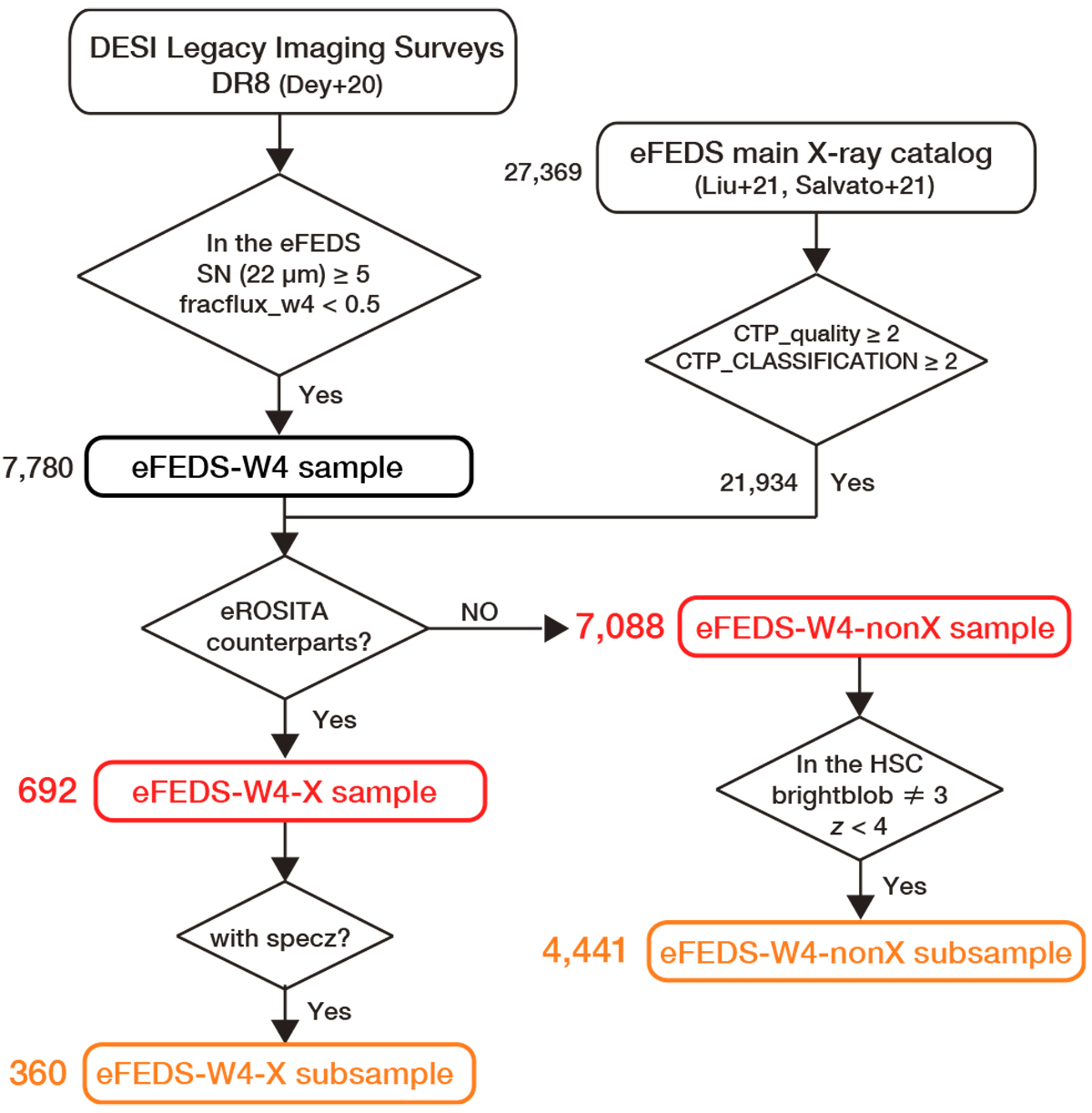