The eROSITA Final Equatorial-Depth Survey (eFEDS). Identification and characterization of the counterparts to point-like sources

Context. In November 2019, eROSITA on board of the Spektrum-Roentgen-Gamma (SRG) observatory started to map the entire sky in X-rays. After the four-year survey program, it will reach a flux limit that is about 25 times deeper than ROSAT. During the SRG performance verification phase, eROSITA observed a contiguous 140 deg2 area of the sky down to the final depth of the eROSITA all-sky survey (eROSITA Final Equatorial-Depth Survey; eFEDS), with the goal of obtaining a census of the X-ray emitting populations (stars, compact objects, galaxies, clusters of galaxies, and active galactic nuclei) that will be discovered over the entire sky.
Aims: This paper presents the identification of the counterparts to the point sources detected in eFEDS in the main and hard samples and their multi-wavelength properties, including redshift.
Methods: To identifyy the counterparts, we combined the results from two independent methods (NWAY and ASTROMATCH), trained on the multi-wavelength properties of a sample of 23k XMM-Newton sources detected in the DESI Legacy Imaging Survey DR8. Then spectroscopic redshifts and photometry from ancillary surveys were collated to compute photometric redshifts.
Results: Of the eFEDS sources, 24 774 of 27 369 have reliable counterparts (90.5%) in the main sample and 231 of 246 sourcess (93.9%) have counterparts in the hard sample, including 2514 (3) sources for which a second counterpart is equally likely. By means of reliable spectra, Gaia parallaxes, and/or multi-wavelength properties, we have classified the reliable counterparts in both samples into Galactic (2695) and extragalactic sources (22 079). For about 340 of the extragalactic sources, we cannot rule out the possibility that they are unresolved clusters or belong to clusters. Inspection of the distributions of the X-ray sources in various optical/IR colour-magnitude spaces reveal a rich variety of diverse classes of objects. The photometric redshifts are most reliable within the KiDS/VIKING area, where deep near-infrared data are also available.
Conclusions: This paper accompanies the eROSITA early data release of all the observations performed during the performance and verification phase. Together with the catalogues of primary and secondary counterparts to the main and hard samples of the eFEDS survey, this paper releases their multi-wavelength properties and redshifts. 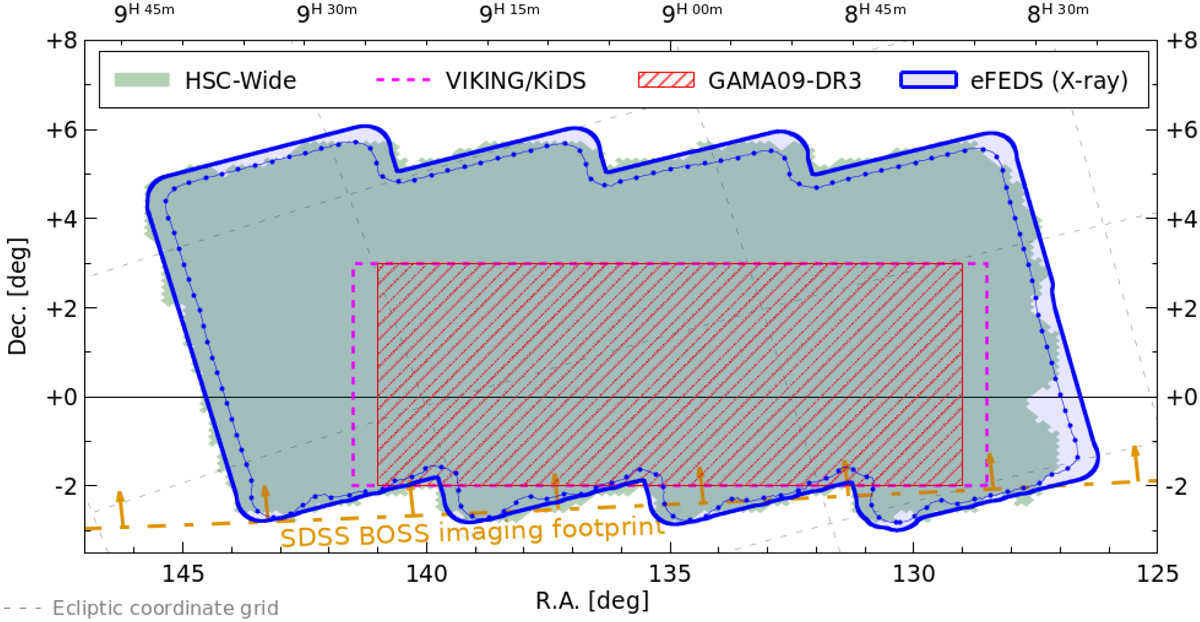