Velocity structure of the 50 pc long NGC 6334 filamentary cloud. Hints of multiple compressions and their impact on the cloud properties

Context. The interstellar medium is observed to be organized in filamentary structures, and in neutral (H I) and ionized (H II) bubbles. The expanding nature of these bubbles shapes the surrounding medium and possibly plays a role in the formation and evolution of the interstellar filaments. The impact of the expansion of these bubbles on the interstellar medium is not well understood.
Aims: Our aim is to describe the kinematics of a filamentary molecular cloud forming high-mass stars and hosting multiple H II regions in order to study the possible environmental impact on the properties of molecular filaments.
Methods: We present APEX 13CO and C18O(2-1) mapping observations of the 10 × 50 pc NGC 6334 molecular cloud complex. We investigated the gas velocity structure along and across the 50 pc long cloud and toward velocity-coherent filaments (VCFs).
Results: The NGC 6334 complex is observed to have a coherent velocity structure smoothly varying by ~5 km s−1 over its 50 pc elongation parallel to the Galactic plane. We identify a sample of 75 VCFs in the C18O(2-1) position-position-velocity cube and present the properties of 47 VCFs with a length ≳1 pc (five beams). We measure a large number of velocity gradients along the VCFs. The amplitudes of these velocity gradients and the velocity dispersion measured along the crests increase with the column density of the VCFs. We derive the column density and velocity power spectra of the VCFs. These power spectra are well represented with power laws showing similar slopes for the two quantities (with a mean of about −2), although some differ by up to a factor of 2. The position velocity diagrams perpendicular to three VCFs (selected from different physical environments) show the V-shaped velocity pattern corresponding to a bent structure in velocity space with the filament at the tip of the V surrounded by an extended structure connected to it with a velocity gradient. This velocity structure is qualitatively similar to that resulting from numerical simulations of filament formation from large-scale compression from propagating shock fronts. In addition, the radial profiles perpendicular to these VCFs hint to small-scale internal impacts from neighboring H II bubbles on two of them, while the third is mostly unaffected.
Conclusions: The observed opposite curvature in velocity space (V- and A-shaped) toward the VCFs points to various origins of large-scale external compressions from propagating H I bubbles. This suggests the plausible importance of multiple H I compressions, separated in space and time, in the formation and evolution of molecular clouds and their star formation history. These atomic compressions due to past and distant star formation events are complemented by the impact of H II bubbles from present time and local star formation activity. 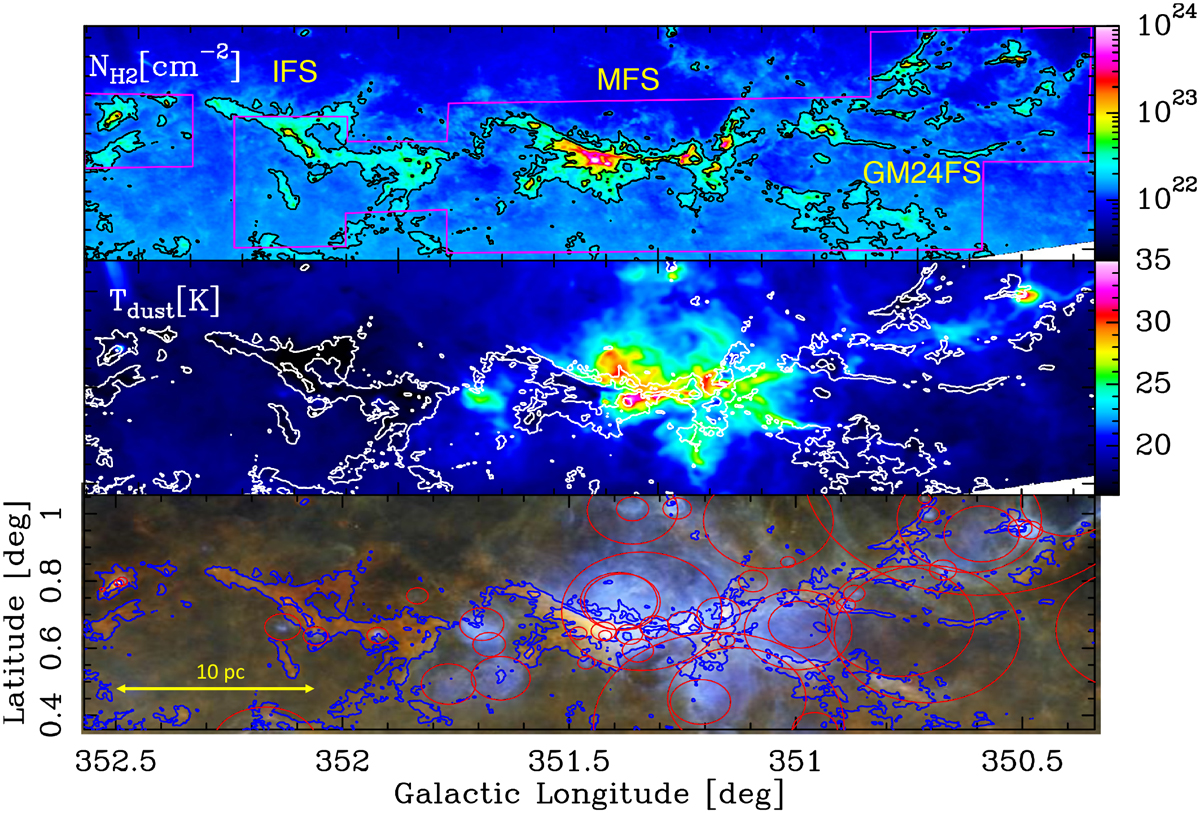