Context. Gas giants orbiting close to hot and massive early-type stars can reach dayside temperatures that are comparable to those of the coldest stars. These `ultra-hot Jupiters' have atmospheres made of ions and atomic species from molecular dissociation and feature strong day-to-night temperature gradients. Photometric observations at different orbital phases provide insights on the planet's atmospheric properties.
Aims: We aim to analyse the photometric observations of WASP-189 acquired with the Characterising Exoplanet Satellite (CHEOPS) to derive constraints on the system architecture and the planetary atmosphere.
Methods: We implemented a light-curve model suited for an asymmetric transit shape caused by the gravity-darkened photosphere of the fast-rotating host star. We also modelled the reflective and thermal components of the planetary flux, the effect of stellar oblateness and light-travel time on transit-eclipse timings, the stellar activity, and CHEOPS systematics.
Results: From the asymmetric transit, we measure the size of the ultra-hot Jupiter WASP-189 b, Rp = 1.600−0.016+0.017 RJ, with a precision of 1%, and the true orbital obliquity of the planetary system, Ψp = 89.6 ± 1.2deg (polar orbit). We detect no significant hotspot offset from the phase curve and obtain an eclipse depth of δecl = 96.5−5.0+4.5 ppm, from which we derive an upper limit on the geometric albedo: Ag < 0.48. We also find that the eclipse depth can only be explained by thermal emission alone in the case of extremely inefficient energy redistribution. Finally, we attribute the photometric variability to the stellar rotation, either through superficial inhomogeneities or resonance couplings between the convective core and the radiative envelope.
Conclusions: Based on the derived system architecture, we predict the eclipse depth in the upcoming Transiting Exoplanet Survey Satellite (TESS) observations to be up to ~165 ppm. High-precision detection of the eclipse in both CHEOPS and TESS passbands might help disentangle reflective and thermal contributions. We also expect the right ascension of the ascending node of the orbit to precess due to the perturbations induced by the stellar quadrupole moment J2 (oblateness). 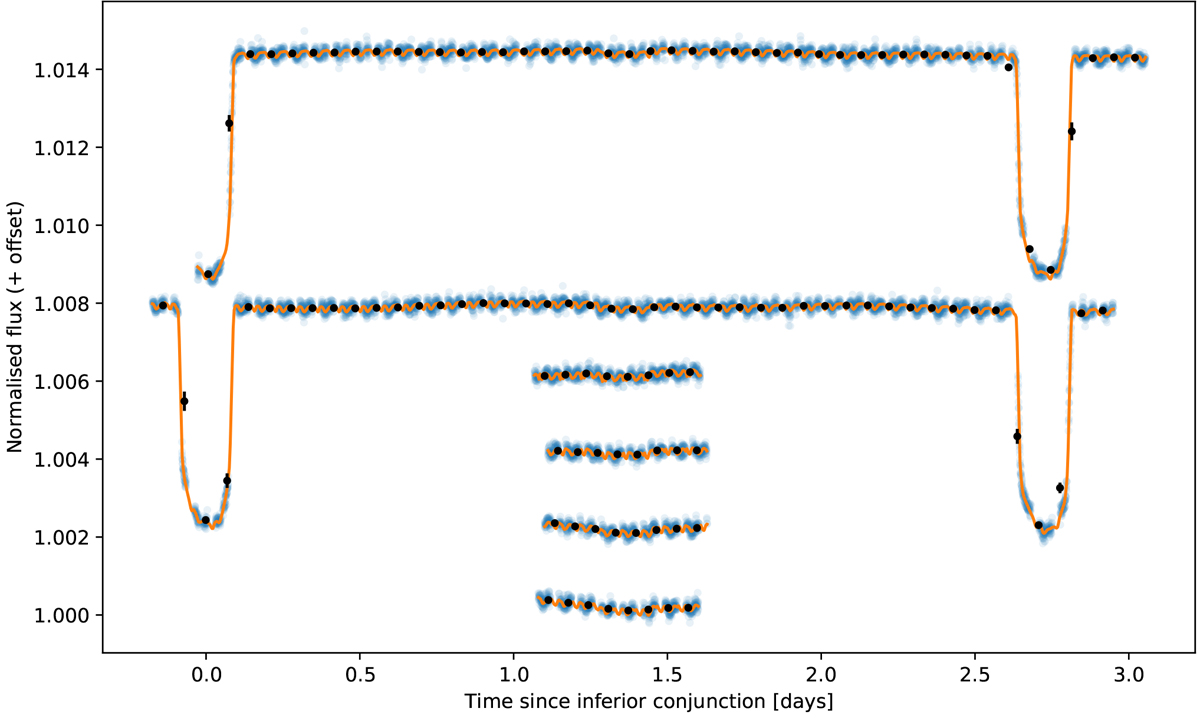