The mass and size of Herbig disks as seen by ALMA

Context. Many population studies have been performed over the past decade with the Atacama Large millimeter/submillimeter Array (ALMA) to understand the bulk properties of protoplanetary disks around young stars. The studied populations have mostly consisted of late spectral type (i.e., G, K & M) stars, with relatively few more massive Herbig stars (spectral types B, A & F). With Gaia-updated distances, now is a good time to use ALMA archival data for a Herbig disk population study and take an important step forward in our understanding of planet formation.
Aims: The aim of this work is to determine the masses and sizes of all Herbig dust disks observed with ALMA to date in a volume-limited sample out to 450 pc. These masses and sizes are put in the context of the Lupus and Upper Sco T Tauri disk populations.
Methods: ALMA Band 6 and Band 7 archival data of 36 Herbig stars are used, making this work 64% complete out to 225 pc, and 38% complete out to 450 pc also including Orion. Using stellar parameters and distances, the dust masses and sizes of the disks are determined via a curve-of-growth method. Survival analysis is used to obtain cumulative distributions of the dust masses and radii.
Results: Herbig disks have a higher dust mass than the T Tauri disk populations of Lupus and Upper Sco by factors of ~3 and ~7 respectively. In addition, Herbig disks are often larger than the typical T Tauri disk. Although the masses and sizes of Herbig disks extend over a similar range to those of T Tauri disks, the distributions of masses and sizes of Herbig disks are significantly skewed toward higher values. Lastly, group I disks are more massive than group II disks. An insufficient number of group II disks are observed at sufficient angular resolution to determine whether or not they are also small in size compared to group I disks.
Conclusions: Herbig disks are skewed towards more massive and larger dust disks compared to T Tauri disks. Based on this we speculate that these differences find their origin in an initial disk mass that scales with the stellar mass, and that subsequent disk evolution enlarges the observable differences, especially if (sub)millimeter continuum optical depth plays a role. Moreover, the larger disk masses and sizes of Herbig stars could be linked to the increasing prevalence of giant planets with host star mass. 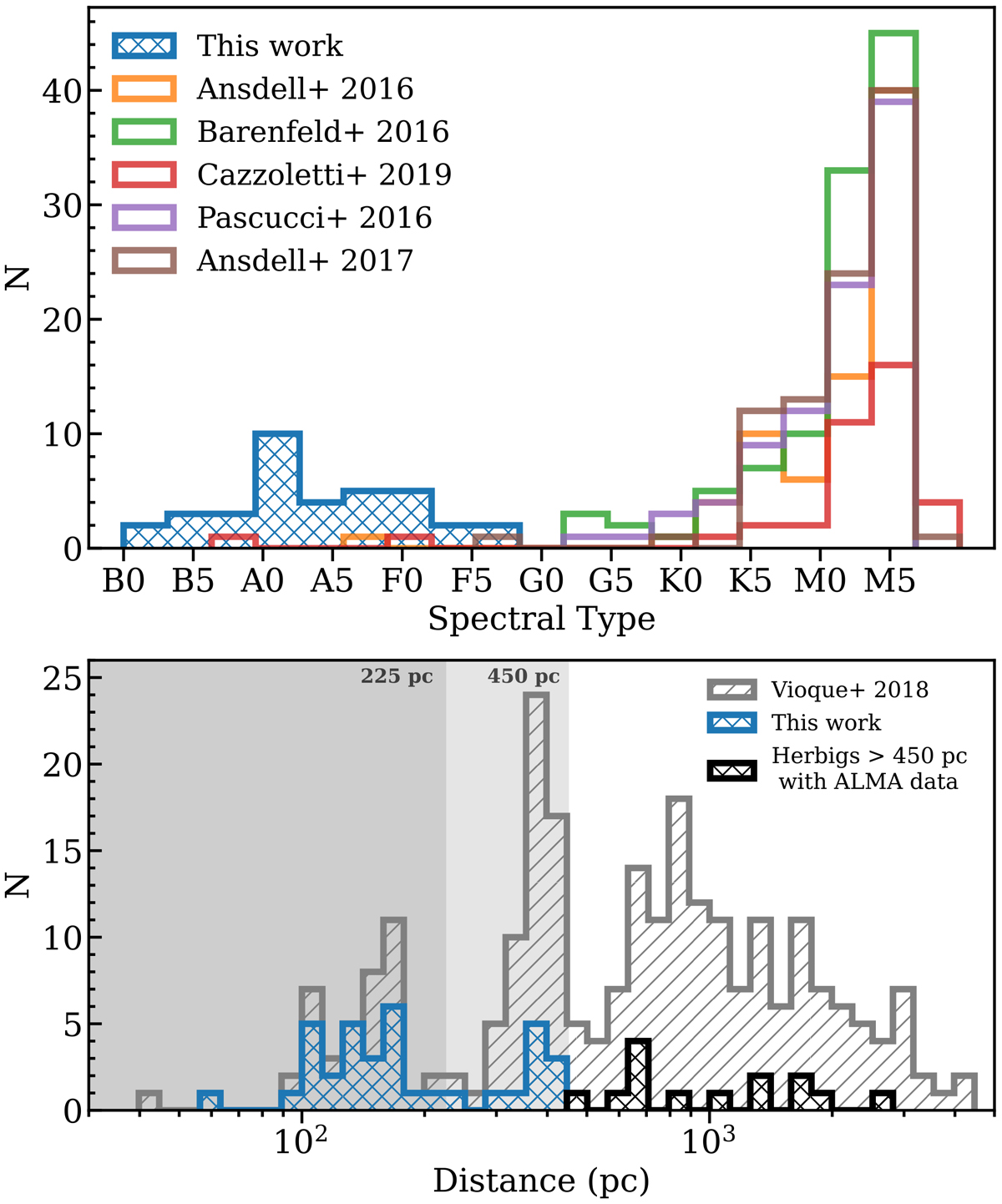