Spi-OPS: Spitzer and CHEOPS confirm the near-polar orbit of MASCARA-1 b and reveal a hint of dayside reflection

Context. The light curves of tidally locked hot Jupiters transiting fast-rotating, early-type stars are a rich source of information about both the planet and star, with full-phase coverage enabling a detailed atmospheric characterisation of the planet. Although it is possible to determine the true spin-orbit angle Ψ - a notoriously difficult parameter to measure - from any transit asymmetry resulting from gravity darkening induced by the stellar rotation, the correlations that exist between the transit parameters have led to large disagreements in published values of Ψ for some systems.
Aims: We aimed to study these phenomena in the light curves of the ultra-hot Jupiter MASCARA-1 b, which is characteristically similar to well-studied contemporaries such as KELT-9 b and WASP-33 b.
Methods: We obtained optical CHaracterising ExOPlanet Satellite (CHEOPS) transit and occultation light curves of MASCARA-1 b, and analysed them jointly with a Spitzer/IRAC 4.5 μm full-phase curve to model the asymmetric transits, occultations, and phase-dependent flux modulation. For the latter, we employed a novel physics-driven approach to jointly fit the phase modulation by generating a single 2D temperature map and integrating it over the two bandpasses as a function of phase to account for the differing planet-star flux contrasts. The reflected light component was modelled using the general ab initio solution for a semi-infinite atmosphere.
Results: When fitting the CHEOPS and Spitzer transits together, the degeneracies are greatly diminished and return results consistent with previously published Doppler tomography. Placing priors informed by the tomography achieves even better precision, allowing a determination of Ψ = 72.1−2.4+2.5 deg. From the occultations and phase variations, we derived dayside and nightside temperatures of 3062−68+66 K and 1720 ± 330 K, respectively.Our retrieval suggests that the dayside emission spectrum closely follows that of a blackbody. As the CHEOPS occultation is too deep to be attributed to blackbody flux alone, we could separately derive geometric albedo Ag = 0.171−0.068+0.066 and spherical albedo As = 0.266−0.100+0.097 from the CHEOPS data, and Bond albedoAB = 0.057−0.101+0.083 from the Spitzer phase curve.Although small, the Ag and As indicate that MASCARA-1 b is more reflective than most other ultra-hot Jupiters, where H− absorption is expected to dominate.
Conclusions: Where possible, priors informed by Doppler tomography should be used when fitting transits of fast-rotating stars, though multi-colour photometry may also unlock an accurate measurement of Ψ. Our approach to modelling the phase variations at different wavelengths provides a template for how to separate thermal emission from reflected light in spectrally resolved James Webb Space Telescope phase curve data. 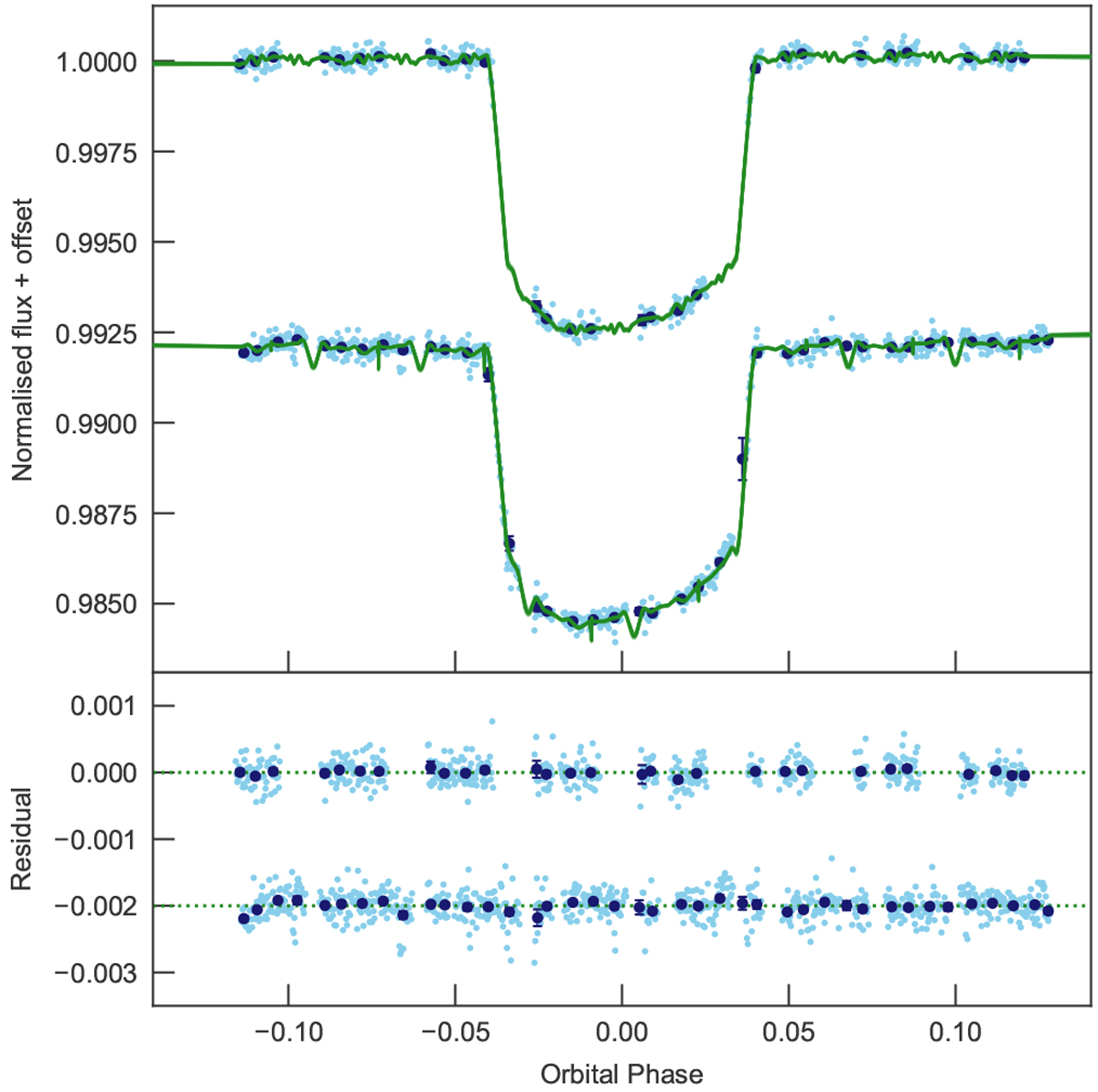