W51 North: A protocluster emerging out of a thermally inhibited fragmenting cloud

Context. The fragmentation process in massive star-forming regions is one of the contemporary problems in astrophysics, and several physical processes have been proposed to control the fragmentation including turbulence, magnetic field, rotation, stellar feedback, and gravity. However, the fragmentation process has been poorly studied at small spatial scales well below 1000 AU.
Aims: W51 IRS2 is a well-known massive star-forming region whose fragmentation properties have not been thoroughly investigated yet. We aim to use the Atacama Large Millimeter and Submillimeter Array (ALMA) high angular resolution data to identify the fragments in W51 IRS2 and to study the fragmentation properties on a spatial scale of 0.04'' (200 AU).
Methods: We used ALMA data of W51 IRS2 from three projects, which give an angular resolution of 0.028'' (144 AU) at millimeter wavelengths. The continuum images reveal a significant substructure in an east-west ridge, where both W51 North and W51d2 are embedded. A spectral index map has been generated from the 3 and 1.3 mm high-resolution continuum images. We identified compact fragments by using uv-range constrained 1.3 mm continuum data. A mean surface density of companions (MSDC) analysis has been performed to study the separations between fragments.
Results: A total number of 33 continuum sources are identified and 29 out of them are defined as fragments in the surveyed region.The MSDC analysis reveals two breaks corresponding to spatial scales of 1845 and 7346 AU, indicative of a two-level clustering phenomenon, along with a linear regime below 1845 AU, mostly associated with W51 North, whose slope is consistent with the slope for the clustering regime of other cluster-like regions in the Galaxy.
Conclusions: The typical masses and separations of the fragments as well as the relation between the density and number of fragments can be explained through a thermal Jeans process operating at high temperatures of 200-400 K, consistent with previous measurements of the temperature in the region, and produced by the nearby massive stars. Therefore, although W51 IRS2 seems to be undergoing a thermally inhibited fragmentation phase, this does not seem to prevent the formation of a protocluster associated with W51 North. 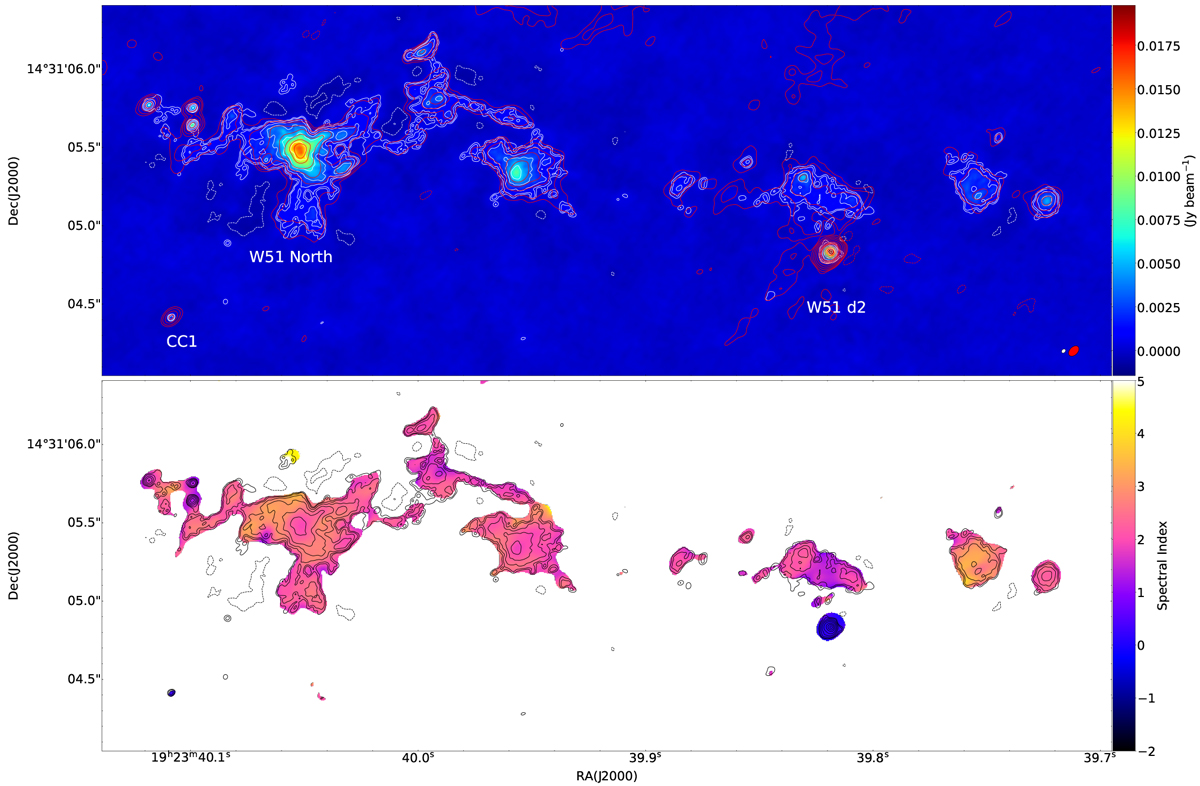