Context. Large and publicly available astronomical archives open up new possibilities to search for and study Solar System objects. However, advanced techniques are required to deal with the large amounts of data. These unbiased surveys can be used to constrain the size distribution of minor bodies, which represents a piece of the puzzle for the formation models of the Solar System.
Aims: We aim to identify asteroids in archival images from the ESA Hubble Space Telescope (HST) Science data archive using data mining.
Methods: We developed a citizen science project on the Zooniverse platform, Hubble Asteroid Hunter, and have asked members of the public to identify asteroid trails in archival HST images. We used the labels provided by the volunteers to train an automated deep learning model built with Google Cloud AutoML Vision to explore the entire HST archive to detect asteroids crossing the field-of-view.
Results: We report the detection of 1701 new asteroid trails identified in archival HST data via our citizen science project and the subsequent machine learning exploration of the ESA HST science data archive. We detect asteroids to a magnitude of 24.5, which are statistically fainter than the populations of asteroids identified from ground-based surveys. The majority of asteroids are distributed near the ecliptic plane, as expected, where we find an approximate density of 80 asteroids per square degree. We matched 670 trails (39% of the trails found) with 454 known Solar System objects in the Minor Planet Center database; however, no matches were found for 1031 (61%) trails. The unidentified asteroids are faint, on average 1.6 magnitudes fainter than the asteroids we succeeded in identifying. They probably correspond to previously unknown objects.
Conclusions: Citizen science and machine learning are very useful techniques for the systematic search for Solar System objects in existing astronomy science data archives. This work describes a method for finding new asteroids in astronomical archives that span decades; it could be effectively applied to other datasets, increasing the overall sample of well-characterised small bodies in the Solar System and refining their ephemerides. 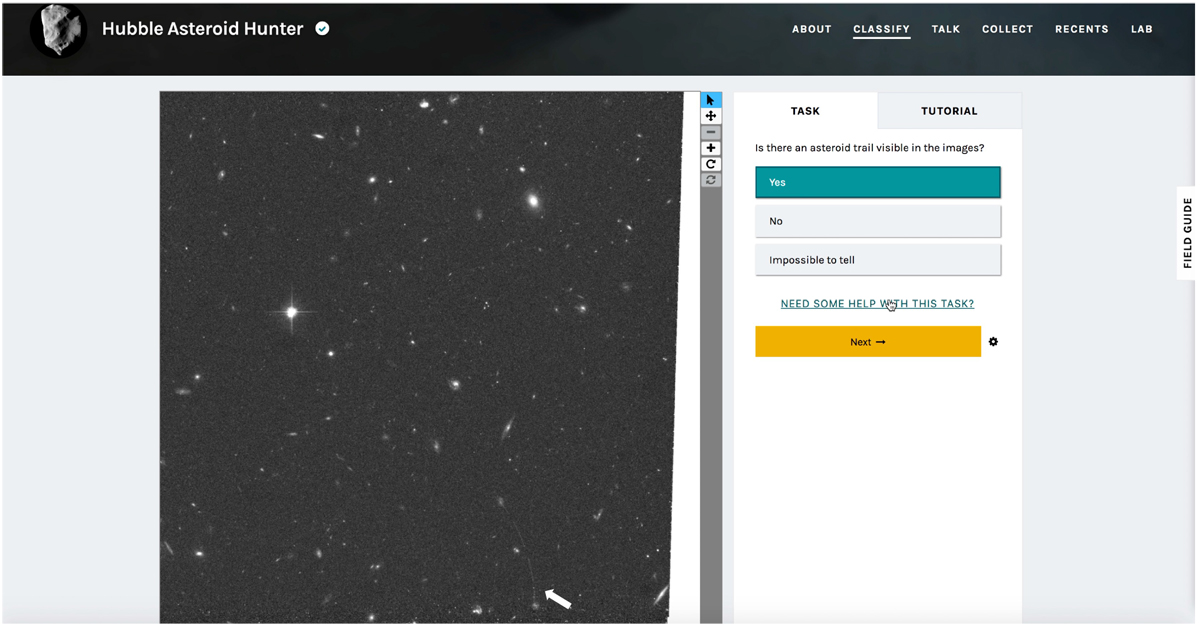