Context. The existence of a group of λ Boo stars has been known for years, however, the origin of its chemical peculiarity is still a matter of debate.
Aims: Our aim is to test the accretion scenario of λ Boo stars. This model predicts that in a binary system with two early-type stars passing through a diffuse cloud, both stars ought to display the same superficial peculiarity.
Methods: Via spectral synthesis, we carried out a detailed abundance determination of three multiple systems hosting a candidate λ Boo star: the remarkable triple system HD 15164/65/65C and the two binary systems HD 193256/281 and HD 198160/161. The stellar parameters were initially estimated using Strömgren photometry or literature values and then refined by requiring excitation and ionization balances for Fe lines. The abundances were determined iteratively for 24 different species by fitting synthetic spectra using the SYNTHE program together with local thermodynamic equilibrium (LTE) ATLAS12 model atmospheres. Specific opacities were calculated for each star, depending on its arbitrary composition and microturbulence velocity, υmicro, through the opacity sampling method. The abundances of the light elements C and O were corrected by non-LTE effects. The complete chemical patterns of the stars were then compared to those of λ Boo stars.
Results: The abundance analysis of the triple system HD 15164/65/65C shows a clear λ Boo object (HD 15165) and two objects with a near-solar composition (HD 15164 and 15165C). Notably, the presence of a λ Boo star (HD 15165) together with a near-solar early-type object (HD 15164) is difficult to explain under the accretion scenario. Also, the solar-like composition derived for the late-type star of the system (HD 15165C) could be used, for the first time, as a proxy for the initial composition of the λ Boo stars. This could help to constrain any model of λ Boo stars formation - not only the accretion scenario. The abundance analysis of the binary system HD 193256/281 shows no clear λ Boo components, while the analysis of HD 198160/161 shows two mild-λ Boo stars. Then, by carefully reviewing the abundance analysis of all known binary systems with candidate λ Boo stars from literature and including the systems analyzed here, we find no binary or multiple system having two clear bona fide λ Boo stars, as would expected from the accretion scenario. The closest candidates to exhibiting two λ Boo-like stars are the binary systems HD 84948, HD 171948, and HD 198160; however we find that they show mild, rather than clear, λ Boo patterns.
Conclusions: We performed, for the first time, a complete analysis of a triple system that includes a λ Boo candidate. Our results brings little support to the accretion scenario of λ Boo stars. Furthermore, there is an urgent need for additional binary and multiple systems to be analyzed via a detailed abundance analysis in order to test the accretion model of λ Boo stars. 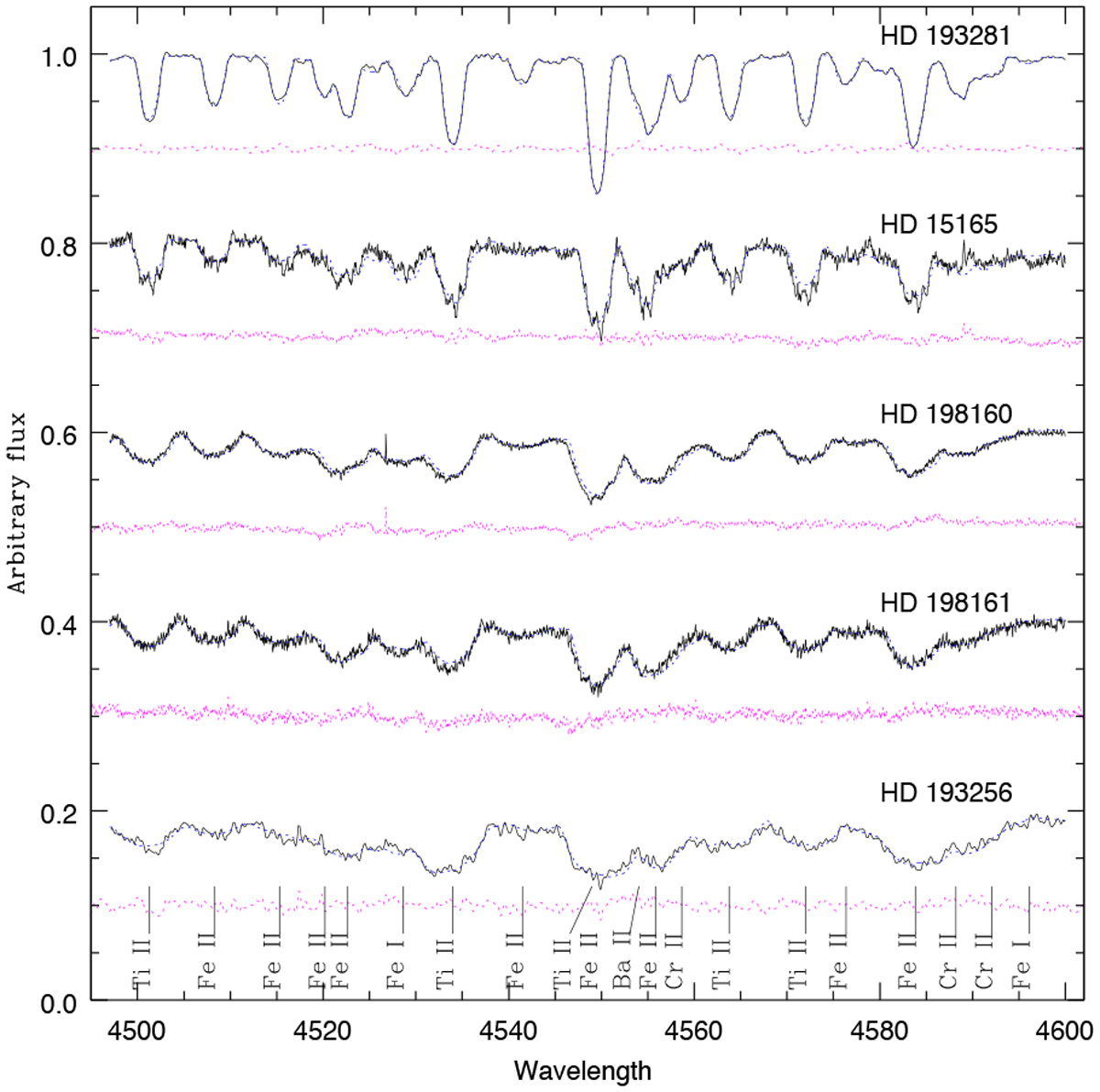