Physical properties of a fan-shaped jet backlit by an X9.3 flare

Context. Fan-shaped jets sometimes form above light bridges and are believed to be driven by the reconnection of the vertical umbral field with the more horizontal field above the light bridges. Because these jets are not fully opaque in the wings of most chromospheric lines, it is not possible to study their spectra without highly complex considerations of radiative transfer in spectral lines from the atmosphere behind the fan.
Aims: We take advantage of a unique set of observations of the Hα line along with the Ca II 8542 Å and Ca II K lines obtained with the CRISP and CHROMIS instrument of the Swedish 1-m Solar Telescope to study the physical properties of a fan-shaped jet that was backlit by an X9.3 flare. For what we believe to be the first time, we report an observationally derived estimate of the mass and density of material in a fan-shaped jet.
Methods: The Hα flare ribbon emission profiles from behind the fan are highly broadened and flattened, allowing us to investigate the fan with a single slab via Beckers' cloud model, as if it were backlit by a flat spectral profile of continuum emission. Using this model we derived the opacity and velocity of the material in the jet. Using inversions of Ca II 8542 Å emission via the STockholm inversion Code, we were also able to estimate the temperature and to cross-check the velocity of the material in the jet. Finally, we used the masses and the plane-of-sky and line-of-sight velocities as functions of time to investigate the downward supply of energy and momentum to the photosphere in the collapse of this jet, and evaluated it as a potential driver for a sunquake beneath.
Results: We find that the physical properties of the fan material are reasonably chromospheric in nature, with a temperature of 7050 ± 250 K and a mean density of 2 ± 0.3 × 10−11 g cm−3.
Conclusions: The total mass observed in Hα was found to be 3.9 ± 0.7 × 1013 g and the kinetic energy delivered to the base of the fan in its collapse was nearly two orders of magnitude below typical sunquake energies. We therefore rule out this jet as the sunquake driver, but cannot completely rule out larger fan jets as potential drivers. 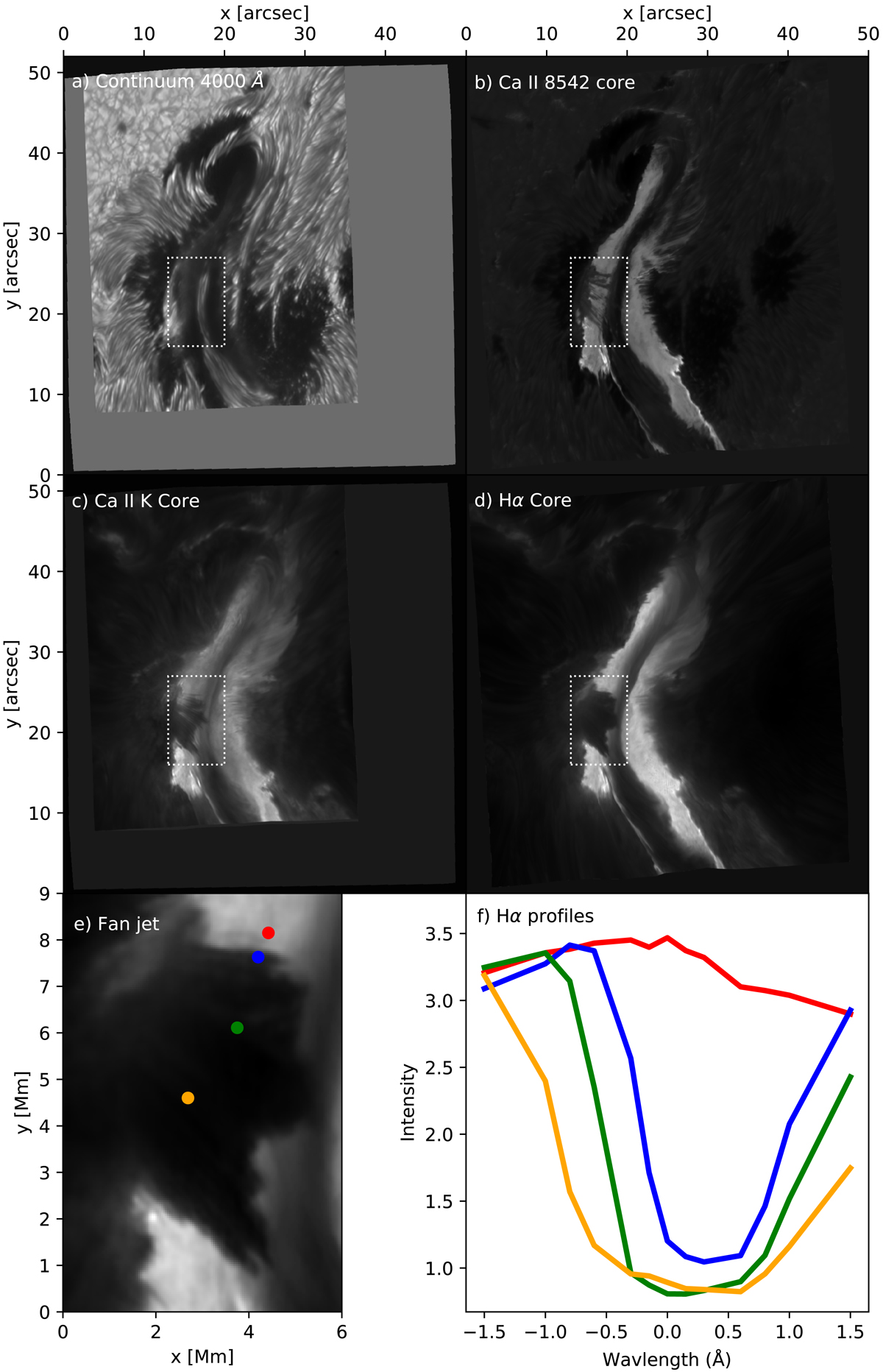