We investigate $r$-process nucleosynthesis and kilonova emission resulting from binary neutron star (BNS) mergers based on a three-dimensional (3D) general-relativistic magnetohydrodynamic (GRMHD) simulation of a hypermassive neutron star (HMNS) remnant. The simulation includes a microphysical finite-temperature equation of state (EOS) and neutrino emission and absorption effects via a leakage scheme. We track the thermodynamic properties of the ejecta using Lagrangian tracer particles and determine its composition using the nuclear reaction network $\texttt{SkyNet}$. We investigate the impact of neutrinos on the nucleosynthetic yields by varying the neutrino luminosities during post-processing. The ejecta show a broad distribution with respect to their electron fraction $Y_e$, peaking between $\sim$0.25-0.4 depending on the neutrino luminosity employed. We find that the resulting $r$-process abundance patterns differ from solar, with no significant production of material beyond the second $r$-process peak when using luminosities recorded by the tracer particles. We also map the HMNS outflows to the radiation hydrodynamics code $\texttt{SNEC}$ and predict the evolution of the bolometric luminosity as well as broadband light curves of the kilonova. The bolometric light curve peaks on the timescale of a day and the brightest emission is seen in the infrared bands. This is the first direct calculation of the $r$-process yields and kilonova signal expected from HMNS winds based on 3D GRMHD simulations. For longer-lived remnants, these winds may be the dominant ejecta component producing the kilonova emission. 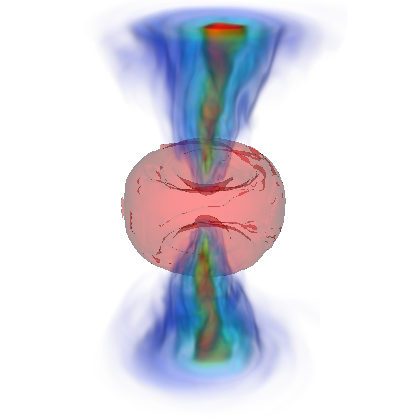