The observations of external galaxies are projected to the 2D sky plane. Reconstructing the 3D intrinsic density distribution of a galaxy from the 2D image is challenging, especially for barred galaxies, but is a critical step for constructing galactic dynamical models. Here, we present a method for deprojecting barred galaxies and we validate the method by testing against mock images created from an N-body simulation with a peanut-shaped bar. We decompose a galaxy image into a bulge (including a bar) and a disc. By subtracting the disc from the original image a barred bulge remains. We perform multi-Gaussian expansion (MGE) fit to each component, then we deproject them separately by considering the barred bulge is triaxial while the disc is axisymmetric. We restrict the barred bulge to be aligned in the disc plane and has a similar thickness to the disc in the outer regions. The 3D density distribution is thus constructed by combining the barred bulge and the disc. Our model can generally recover the 3D density distribution of disc and inner barred bulge regions, although not a perfect match to the peanut-shaped structure. By using the same initial conditions, we integrate the orbits in our model-inferred potential and the true potential by freezing the N-body simulation. We find that $85{{\ \rm per\ cent}}$ of all these orbits have similar morphologies in these two potentials, and our model supports the orbits that generate a boxy/peanut-shaped structure and an elongated bar similar to these in the true potential. 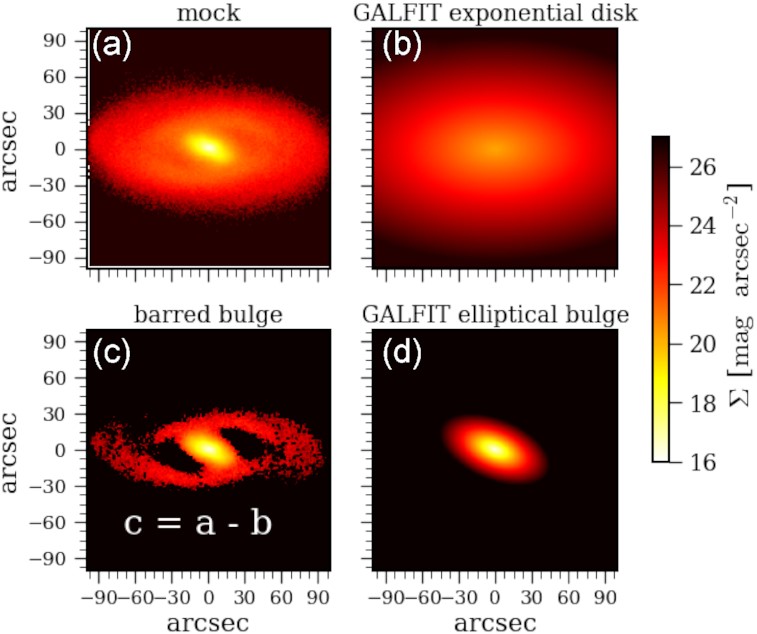