The effects of magnetic fields on observational signatures of atmospheric escape in exoplanets: Double tail structures

Using 3D radiative MHD simulations and Lyman-α transit calculations, we investigate the effect of magnetic fields on the observational signatures of atmospheric escape in exoplanets. Using the same stellar wind, we vary the planet's dipole field strength (Bp) from 0 to 10G. For Bp < 3G, the structure of the escaping atmosphere begins to break away from a comet-like tail following the planet (Bp = 0), as we see more absorbing material above and below the orbital plane. For Bp ≥ 3G, we find a 'dead-zone' around the equator, where low velocity material is trapped in the closed magnetic field lines. The dead-zone separates two polar outflows where absorbing material escapes along open field lines, leading to a double tail structure, above and below the orbital plane. We demonstrate that atmospheric escape in magnetized planets occurs through polar outflows, as opposed to the predominantly night-side escape in non-magnetized models. We find a small increase in escape rate with Bp, though this should not affect the time-scale of atmospheric loss. As the size of the dead-zone increases with Bp, so does the line centre absorption in Lyman-α, as more low-velocity neutral hydrogen covers the stellar disc during transit. For Bp < 3G the absorption in the blue wing decreases, as the escaping atmosphere is less funnelled along the line of sight by the stellar wind. In the red wing (and for Bp > 3G in the blue wing) the absorption increases caused by the growing volume of the magnetosphere. Finally we show that transits below and above the mid-disc differ caused by the asymmetry of the double tail structure. 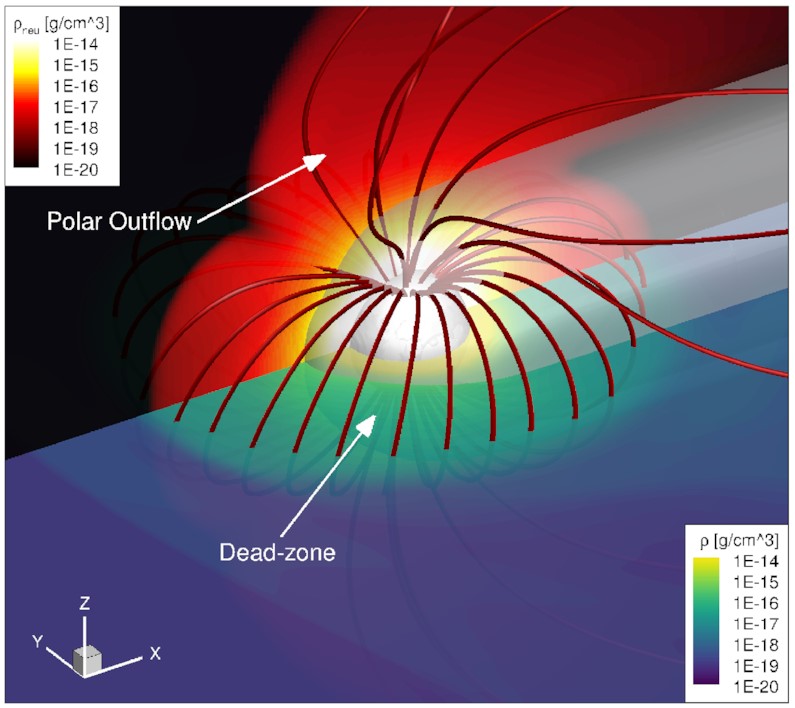