Many observed disc galaxies harbour a central bar. In the standard cosmological paradigm, galactic bars should be slowed down by dynamical friction from the dark matter halo. This friction depends on the galaxy's physical properties in a complex way, making it impossible to formulate analytically. Fortunately, cosmological hydrodynamical simulations provide an excellent statistical population of galaxies, letting us quantify how simulated galactic bars evolve within dark matter haloes. We measure bar strengths, lengths, and pattern speeds in barred galaxies in state-of-the-art cosmological hydrodynamical simulations of the IllustrisTNG and EAGLE projects, using techniques similar to those used observationally. We then compare our results with the largest available observational sample at redshift z = 0. We show that the tension between these simulations and observations in the ratio of corotation radius to bar length is 12.62σ (TNG50), 13.56σ (TNG100), 2.94σ (EAGLE50), and 9.69σ (EAGLE100), revealing for the first time that the significant tension reported previously persists in the recently released TNG50. The lower statistical tension in EAGLE50 is actually caused by it only having five galaxies suitable for our analysis, but all four simulations give similar statistics for the bar pattern speed distribution. In addition, the fraction of disc galaxies with bars is similar between TNG50 and TNG100, though somewhat above EAGLE100. The simulated bar fraction and its trend with stellar mass both differ greatly from observations. These dramatic disagreements cast serious doubt on whether galaxies actually have massive cold dark matter haloes, with their associated dynamical friction acting on galactic bars. 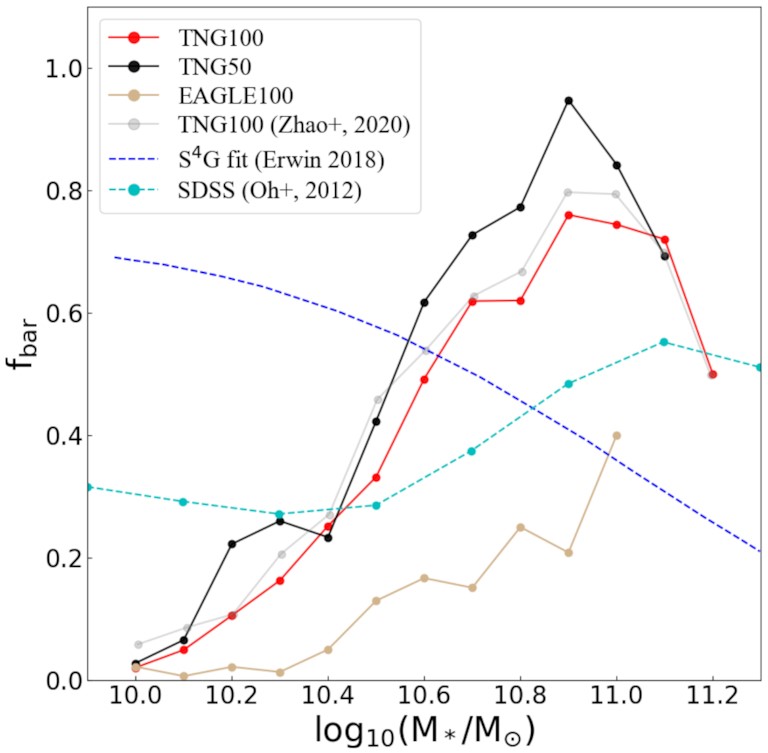