We report on the discovery of Swift J011511.0-725611, a rare Be X-ray binary system (BeXRB) with a white dwarf (WD) compact object, in the Small Magellanic Cloud (SMC) by S-CUBED, a weekly X-ray/UV survey of the SMC by the Neil Gehrels Swift Observatory. Observations show an approximately 3 month outburst from Swift J011511.0-725611, the first detected by S-CUBED since it began in 2016 June. Swift J011511.0-725611 shows supersoft X-ray emission, indicative of a WD compact object, which is further strengthened by the presence of an 0.871 keV edge, commonly attributed to O VIII K-edge in the WD atmosphere. Spectroscopy by South African Large Telescope confirms the Be nature of the companion star, and long term light curve by OGLE finds both the signature of a circumstellar disc in the system at outburst time, and the presence of a 17.4 day periodicity, likely the orbital period of the system. Swift J011511.0-725611 is suggested to be undergoing a Type-II outburst, similar to the previously reported SMC Be white dwarf binary (BeWD), Swift J004427.3-734801. It is likely that the rarity of known BeWD is in part due to the difficulty in detecting such outbursts due to both their rarity, and their relative faintness compared to outbursts in Neutron Star BeXRBs. 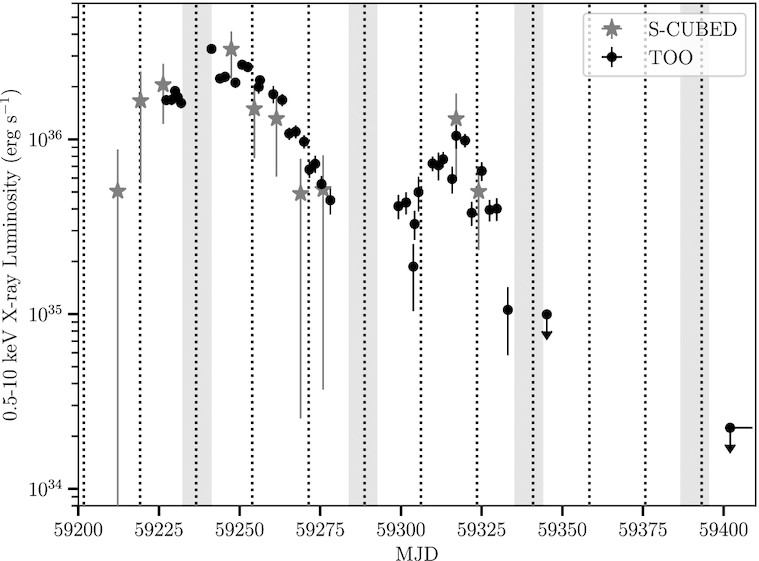