Galaxy evolution on resolved scales: ageing and quenching in CALIFA

This work investigates the fundamental mechanism(s) that drive galaxy evolution in the local Universe. By comparing two proxies of star formation sensitive to different time-scales, such as EW($\rm H\,\alpha$) and colours like g - r, one may distinguish between smooth secular evolution (ageing) and sudden changes (quenching) in the recent star formation history of galaxies. Building upon the results obtained from a former study based on 80 000 Sloan Digital Sky Survey (SDSS) single-fibre measurements, we now focus on spatially resolved (on kpc scales) galaxies, comparing with a sample of 637 nearby objects observed by the Calar Alto Legacy Integral-Field Area survey. In general, galaxies cannot be characterized in terms of a single 'evolutionary stage'. Individual regions within galaxies arrange along a relatively narrow ageing sequence, with some intrinsic scatter possibly due to their different evolutionary paths. These sequences, though, differ from one galaxy to another, although they are broadly consistent with the overall distribution found for the (central) SDSS spectra. We find evidence of recent quenching episodes (relatively blue colours and strong $\rm H\,\alpha$ absorption) in a small fraction of galaxies (most notably, low-mass ellipticals), on global scales and individual regions (particularly at high metallicity). However, we argue that most of the systems, over their entire extent, are compatible with a secular inside-out scenario, where the evolutionary stage correlates with both global (mass, morphology, and environment) and local (surface brightness and metallicity) properties. 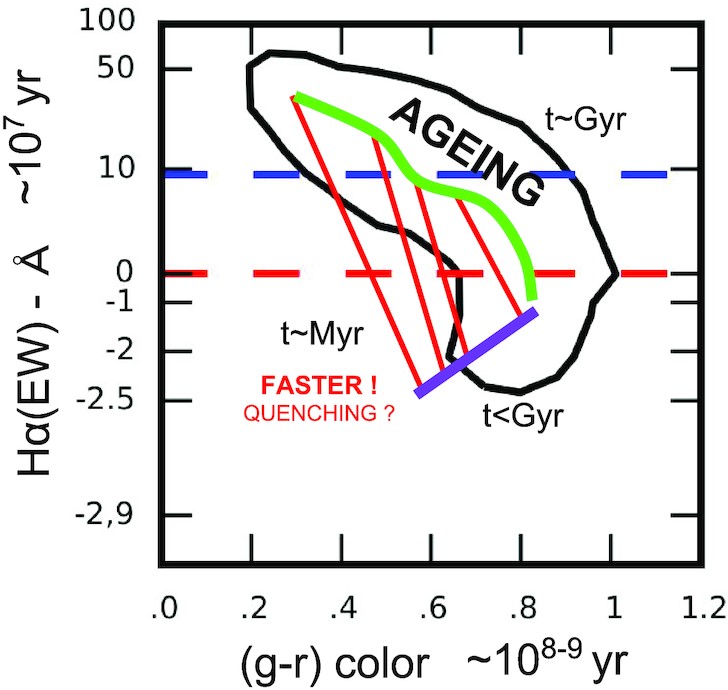