We present an analysis of a new 120 deg2 radio continuum image of the Large Magellanic Cloud (LMC) at 888 MHz with a bandwidth of 288 MHz and beam size of 13${_{.}^{\prime\prime}}$9 × 12${_{.}^{\prime\prime}}$1 from the Australian Square Kilometre Array Pathfinder processed as part of the Evolutionary Map of the Universe survey. The median root mean squared noise is 58 $\mu$Jy beam-1. We present a catalogue of 54 612 sources, divided over a Gold list (30 866 sources) complete down to 0.5 mJy uniformly across the field, a Silver list (22 080 sources) reaching down to <0.2 mJy, and a Bronze list (1666 sources) of visually inspected sources in areas of high noise and/or near bright complex emission. We discuss detections of planetary nebulae and their radio luminosity function, young stellar objects showing a correlation between radio luminosity and gas temperature, novae and X-ray binaries in the LMC, and active stars in the Galactic foreground that may become a significant population below this flux level. We present examples of diffuse emission in the LMC (H II regions, supernova remnants, bubbles) and distant galaxies showcasing spectacular interaction between jets and intracluster medium. Among 14 333 infrared counterparts of the predominantly background radio source population, we find that star-forming galaxies become more prominent below 3 mJy compared to active galactic nuclei. We combine the new 888 MHz data with archival Australia Telescope Compact Array data at 1.4 GHz to determine spectral indices; the vast majority display synchrotron emission but flatter spectra occur too. We argue that the most extreme spectral index values are due to variability. 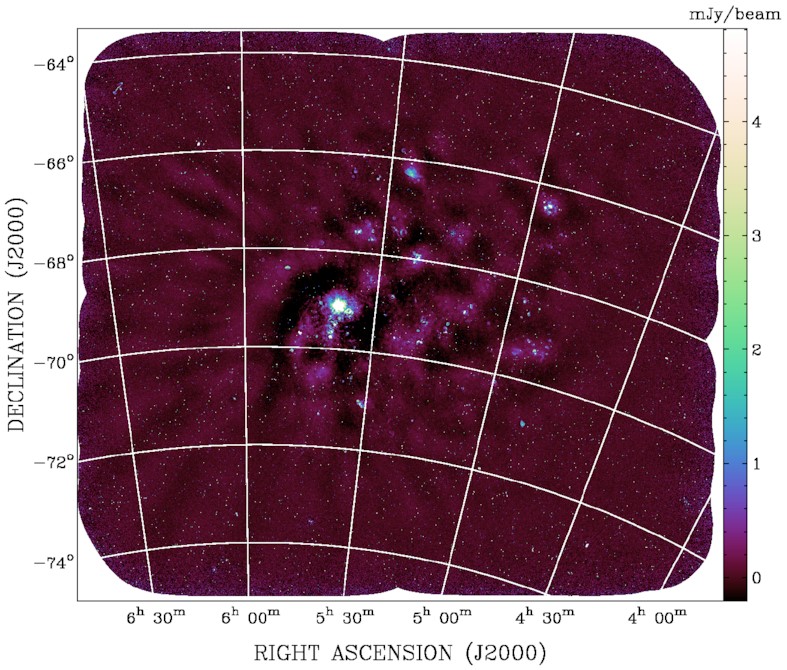