Sulfur chemistry in the atmospheres of warm and hot Jupiters

We present and validate a new network of atmospheric thermochemical and photochemical sulfur reactions. We use a 1D chemical kinetics model to investigate these reactions as part of a broader HCNO chemical network in a series of hot and warm Jupiters. We find that temperatures approaching $1400\, \mathrm{K}$ are favourable for the production of H2S and HS around $\mathrm{10^{-3}\, bar}$ at mixing ratios of around 10-5, an atmospheric level where detection by transit spectroscopy may be possible. At $\mathrm{10^{-3}\, bar}$ and at lower temperatures, down to $1000\, \mathrm{K}$, mixing ratios of S2 can be up to 10-5, at the expense of H2S and HS, which are depleted down to a mixing ratio of 10-7. We also investigate how the inclusion of sulfur can manifest in an atmosphere indirectly, by its effect on the abundance of non-sulfur-bearing species. We find that in a model of the atmosphere of HD 209458 b, the inclusion of sulfur can lower the abundance of NH3, CH4, and HCN by up to two orders of magnitude around $\mathrm{10^{-3}\, bar}$. In the atmosphere of the warm Jupiter 51 Eri b, we additionally find the inclusion of sulfur depletes the peak abundance of CO2 by a factor of 5, qualitatively consistent with prior models. We note that many of the reactions used in the network have poorly determined rate constants, especially at higher temperatures. To obtain an accurate idea of the impact of sulfur chemistry in hot and warm Jupiter atmospheres, experimental measurements of these reaction rates must take place. 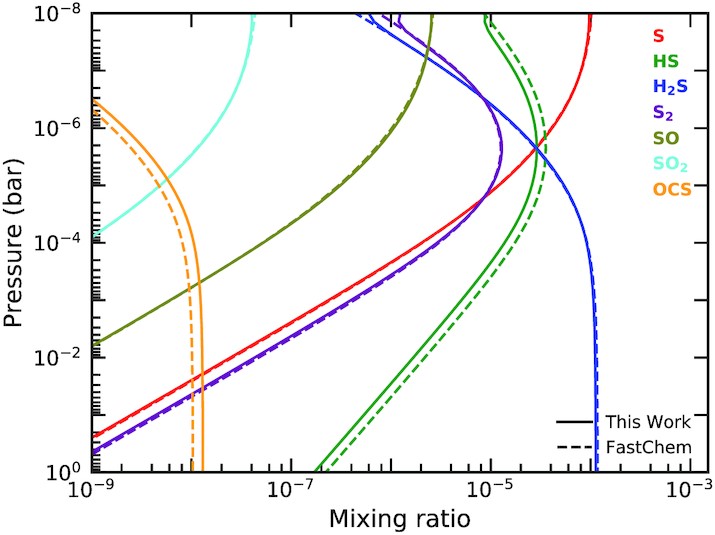