Despite being designed as an interferometer, the MeerKAT radio array (a Square Kilometre Array pathfinder) can also be used in autocorrelation ('single-dish') mode, where each dish scans the sky independently. Operating in this mode allows extremely high survey speeds to be achieved, albeit at significantly lower angular resolution. We investigate the recovery of the baryon acoustic oscillation (BAO) scale from multipoles of the redshift-space correlation function as measured by a low angular resolution 21 cm intensity mapping survey of this kind. Our approach is to construct an analytic model of the multipoles of the correlation function and their covariance matrix that includes foreground contamination and beam resolution effects, which we then use to generate an ensemble of mock data vectors from which we attempt to recover the BAO scale. In line with previous studies, we find that recovery of the transverse BAO scale α⊥ is hampered by the strong smoothing effect of the instrumental beam with increasing redshift, while the radial scale α∥ is much more robust. The multipole formalism naturally incorporates transverse information when it is available however, and so there is no need to perform a radial-only analysis. In particular, the quadrupole of the correlation function preserves a distinctive BAO 'bump' feature even for large smoothing scales. We also investigate the robustness of BAO scale recovery to beam model accuracy, severity of the foreground removal cuts, and accuracy of the covariance matrix model, finding in all cases that the radial BAO scale can be recovered in an accurate, unbiased manner. 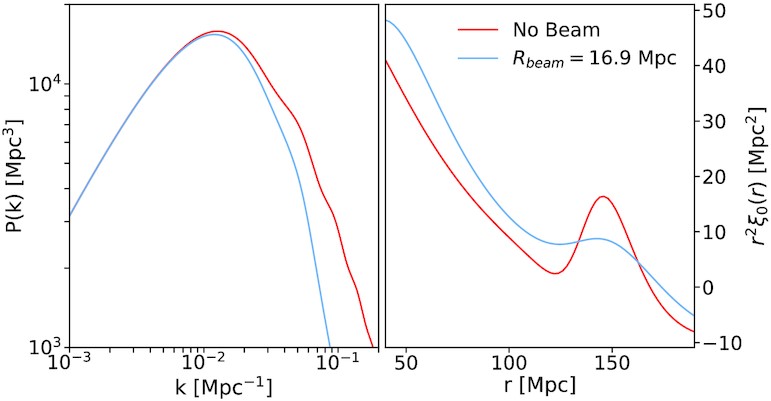