A multishock model for the density variance of anisotropic, highly magnetized, supersonic turbulence

Shocks form the basis of our understanding for the density and velocity statistics of supersonic turbulent flows, such as those found in the cool interstellar medium (ISM). The variance of the density field, $\sigma ^2_{\rho /\rho _0}$, is of particular interest for molecular clouds (MCs), the birthplaces of stars in the Universe. The density variance may be used to infer underlying physical processes in an MC, and parametrizes the star formation (SF) rate of a cloud. However, models for $\sigma ^2_{\rho /\rho _0}$ all share a common feature - the variance is assumed to be isotropic. This assumption does not hold when a trans-/sub-Alfvénic mean magnetic field, ${B}_0$, is present in the cloud, which observations suggest is relevant for some MCs. We develop an anisotropic model for $\sigma _{\rho /\rho _0}^2$, using contributions from hydrodynamical and fast magnetosonic shocks that propagate orthogonal to each other. Our model predicts an upper bound for $\sigma _{\rho /\rho _0}^2$ in the high Mach number $(\mathcal {M})$ limit as small-scale density fluctuations become suppressed by the strong ${B}_0$. The model reduces to the isotropic $\sigma _{\rho /\rho _0}^2\!-\!\mathcal {M}$ relation in the hydrodynamical limit. To validate our model, we calculate $\sigma _{\rho /\rho _0}^2$ from 12 high-resolution, three-dimensional, supersonic, sub-Alfvénic magnetohydrodynamical (MHD) turbulence simulations and find good agreement with our theory. We discuss how the two MHD shocks may be the bimodally oriented overdensities observed in some MCs and the implications for SF theory in the presence of a sub-Alfvénic ${B}_0$. By creating an anisotropic, supersonic density fluctuation model, this study paves the way for SF theory in the highly anisotropic regime of interstellar turbulence. 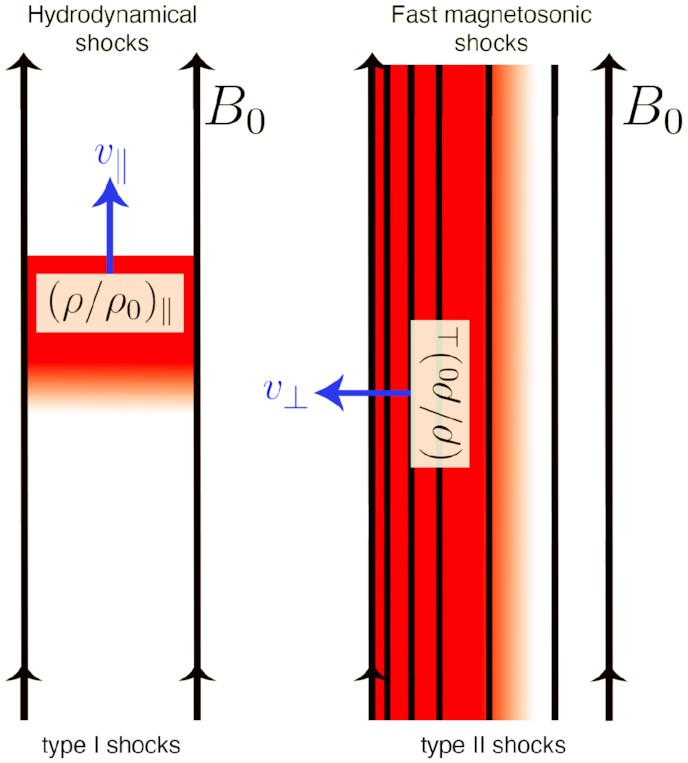